mbath Posted on October 8, 2017 Posted in Building a Foundation, Building Your Own Home, Do Your Own Concrete Work No Comments Tagged with Concrete Forms, Footing Pour, JackJaw, Nail Stakes, Spreaders 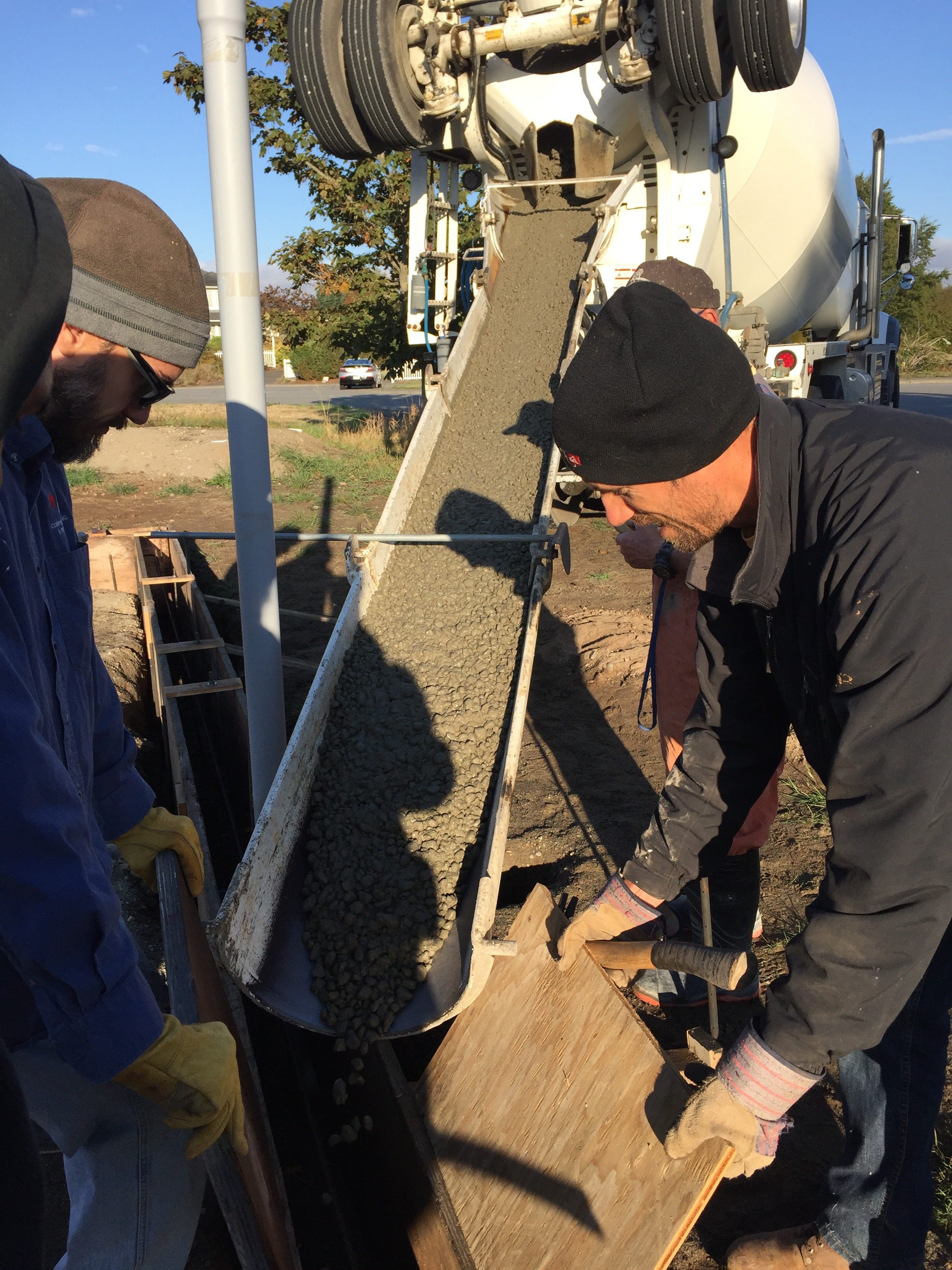 Today marked another milestone in building my own home as the concrete was poured into place that will eventually support the load of 90% of the weight of the house (one last footing will be poured at the same time as the slab and support the other 10%).  As with almost every step in the build so far, there were definitely a few hiccups along the way, but at the end of the day I was pretty pleased with the results.  The major hiccup occurred when a couple of the pieces of wood I was using to hold the forms exactly 8″ apart from each other pulled away from the screws that were holding them in place.  This wasn’t catastrophic because the bottoms of the forms were held in place by the nail stakes, but it is the top of the forms that is the most crucial, so it was important to figure out how to push them back in place and hold them there. You can see the wooden spreader that broke next to my hand in the pic below.

The easiest fix was a little costly, but it worked, and in the grand scheme of the build it will be a minor cost.  I had one of my friends (thank goodness I had some extra help!) run to the local building supply store and buy some steel spreaders and then we used some 2x4s to lever the tops of the forms back into place and lock them together with the spreaders.  I measured it out and the entire pour ended up being less than a 1/2 inch off all the way around the top.  One of the pros of using continuous exterior wall insulation is that it will move the wall out a bit from the footing so you will never be able to see this mistake.  Whew!

Another minor hiccup during the pour was that the weight of the concrete inside the forms was so great that it pushed the concrete underneath and up around the outside of the forms.  If you recall, the concrete was supposed to level out as it reached the bottom of the forms and press into the dirt, creating an upside down T.  Unfortunately the concrete started rising back up at the ends so in reality it was more like an upside down ‘T’ where the apostrophes show where the concrete is rising back up around the form.  Structurally, this was not an issue, and again, this part of the pour will eventually be completely covered by dirt.  The problem was that I hadn’t accounted for the additional concrete in my calculations.  I had ordered extra but started getting scared that the excess I had ordered wouldn’t be enough to cover it.  We solved this problem by pouring the bottom part of the T first and then pouring the top half after the bottom half had about a half hour to cure.  This incurred an additional hourly cost for the pump truck driver but running out of concrete would have been catastrophic.  As it turned out, we would have had enough, but better safe than sorry.  We poured the excess concrete underneath the slab and it will result in needing less gravel in the next phase of the build.

Above you can see the finished result of the pour.  I removed all of the bracing but I’m having a little trouble removing a lot of the nail stakes.  I had purchased a powerful stake puller capable of exerting over 750 pounds of upward force on each stake but it wasn’t enough.  Thankfully, the company said they would send out the next model up and I would only have to pay the difference in price between the two.  Thanks JackJaw!!  It does set me back a week on getting the inspection for the second pour but it could have been worse.  A big shout out to my friends Michael and PJ for all their help  and also to Raphael and his brother who I hired to help with the pour!