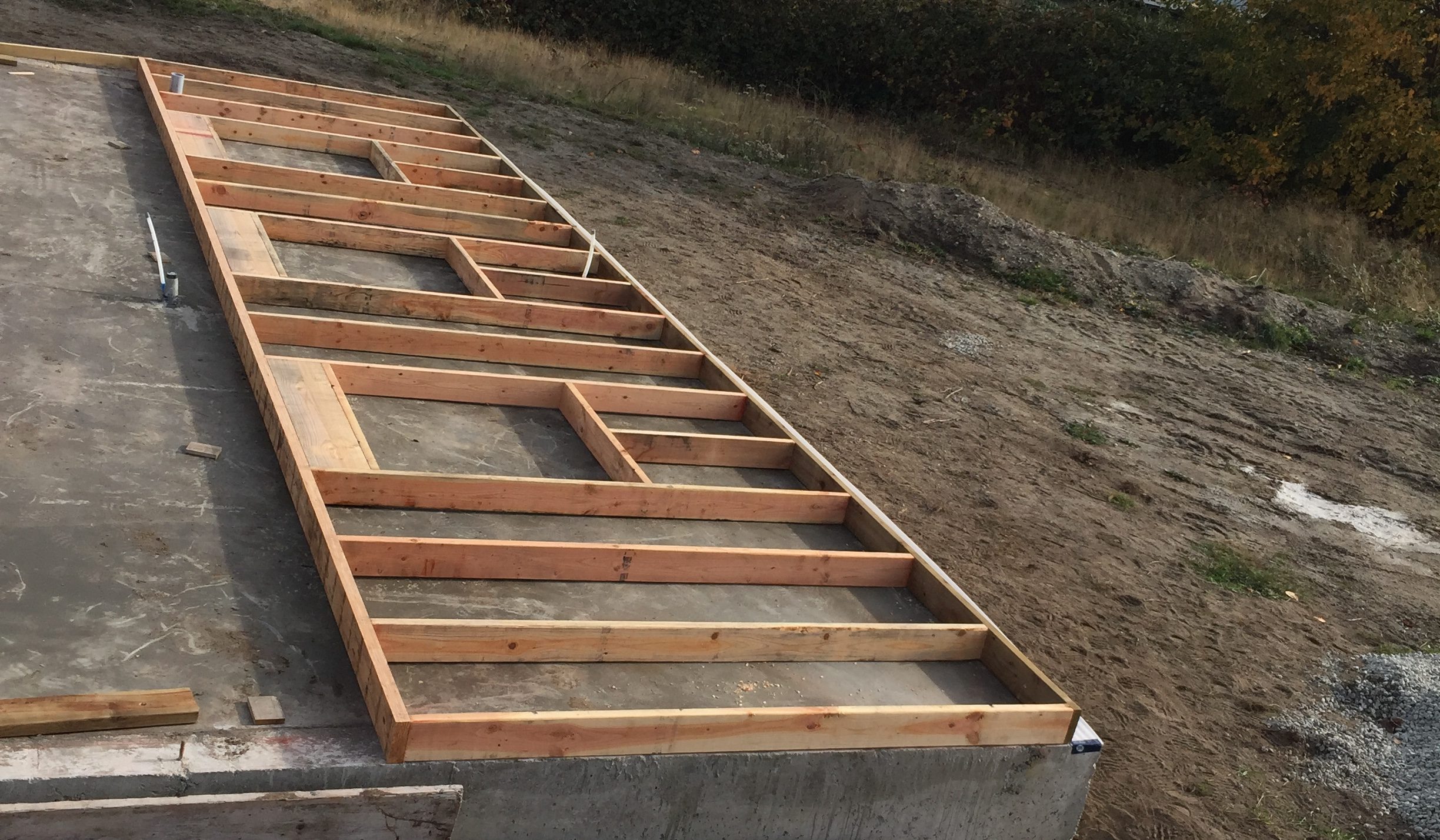 To an experienced framer, the work I have completed over the last couple of days would seem wrong.  It is quite possible they would never have seen a house framed the way that I am framing mine.  A few might even claim that I am violating building codes in not following “standard practice”.  The fact is, I am utilizing a method of framing created in the 1970s in a collaboration between the U.S. Deparment of Housing and Urban Development and the National Association of Home Builders Research Foundation.  Their goal was to reduce the amount of wood used in construction, not only to save the lumber, but more importantly, to create more space for insulation and save on energy usage.  All of these small changes work to ensure the house will be net-zero!

As you can see above, in traditional framing you have a single sill plate at the bottom of the wall connected to a series of studs spaced 14 1/2″ apart from each other (16″ on center) which are then connected to two top plates sandwiched together.  Additional shorter studs called “jack studs” are used to support headers above window and door openings.  Even more studs are used to anchor interior walls to the exterior.  All of the wood used are 2x4s, leaving 3 1/2″ of space between the studs for insulation.

In advanced framing, on the other hand, only a single top plate is used, studs are spaced 22 1/2″ apart (24″ O.C.), and metal “header hangers” are used instead of the jack studs.  On “gable end” walls, no headers are needed at all! (see below) “Ladder framing” is used to anchor interior walls and 2×6 lumber is used, leaving 5 1/2″ of space for insulation (obviously that’s the part of the wall that looks like a ladder in the pic)

The advanced framing system is cheaper because it uses 5% to 10% less lumber, and it is faster because it uses 30% fewer boards (although they are a bit bigger and heavier). More importantly, every single year more money is saved on energy costs because over 60% more insulation can be filled in.

Okay, so what’s the catch?  If advanced framing was added to the building code over 40 years ago, is cheaper and faster, and reduces the energy bill every single month, then why isn’t it standard operating procedure for builders?  How could I possibly be telling you that most builders don’t even know about it?  While I could devote several pages answering that very question, I’ll do my best to sum it up quickly.  Building a house is difficult.  There are very few people who have the knowledge to do it all themselves and I may very well fall flat on my face in trying.  For me, that challenge is exciting, even if it is frustrating at times.  Because of this fact, the vast majority of houses are built by a massive team of “contractors” that under normal circumstances communicate very little with each other, if at all.  These tradesman are managed by a “general contractor” who uses building plans that were probably drawn up by an architect and edited by an engineer.  Although I was able to sum up the advanced framing techniques in a couple sentences, the small changes affect every single one of these workers. The architect and the engineer must design the house from the very beginning so the floor joists and studs stack up within an inch of each stud (see pic above)  This puts a sort of limiting factor on the architect in regards to wall lengths and window placements that many are resistant to.  Next, the general contractor must be open to training the contractors under him because many of them will be unaccustomed to the framing.  The framing crew will be working with a different length of wood due to the single top plate, and have to frame completely differently than they are used to.  The electrician has fewer studs to attach electrical boxes to.  The drywall crew has fewer studs to nail the drywall to and may have to hang it differently.  The small changes ripple right on down the line and affect every single person that works on the house.  As contractors are paid by the job and not by the hour, they aren’t too keen on taking time to learn this new technique.  The fewer that learn it, the fewer that are available to teach it, and the cycle continues…

As I’m building solo, I have none of these issues.  I designed the house myself from the very beginning with advanced framing in mind.  Thanks to my mentor, who introduced me to advanced framing, I’ve never built any other way.  I saved money on lumber and nails.  I saved time with fewer studs to nail together.  I saved trees because of using less lumber (I’ll be using dense packed cellulose in the spaces where the studs would have been which is made of mostly recycled newspaper and denim).  I will save money on my energy bill each month (or be able to use a smaller solar array).  I even save time building because with the larger spacing between studs I can jump in an out of the house anywhere instead of using a doorway.  If you really want to save sustainably, advanced framing is the way to go.