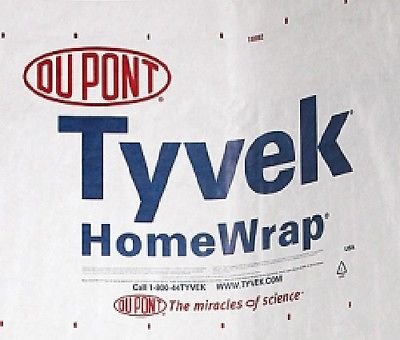 Only the application of a continuous water resistant barrier can truly protect the house from the elements.

I had held off on this step for a while because I needed a solid two or three weeks of good weather.  It isn’t as easy as wrapping the WRB (water resistant barrier) around the house, cutting out holes in the plywood sheathing and sticking a window in.  In the majority of new construction, that is the procedure that is followed, but for my net-zero home there are several incredibly important steps in between.  The first step was to cut out the window openings in the plywood sheathing.  From the inside of the house, I used my framing as a guide to drill a hole in each of the four corners of every window opening.  I then moved outside, connecting the outer edges of the holes with a straight edge and a pencil, and then cutting the sheathing along the lines with a saw. 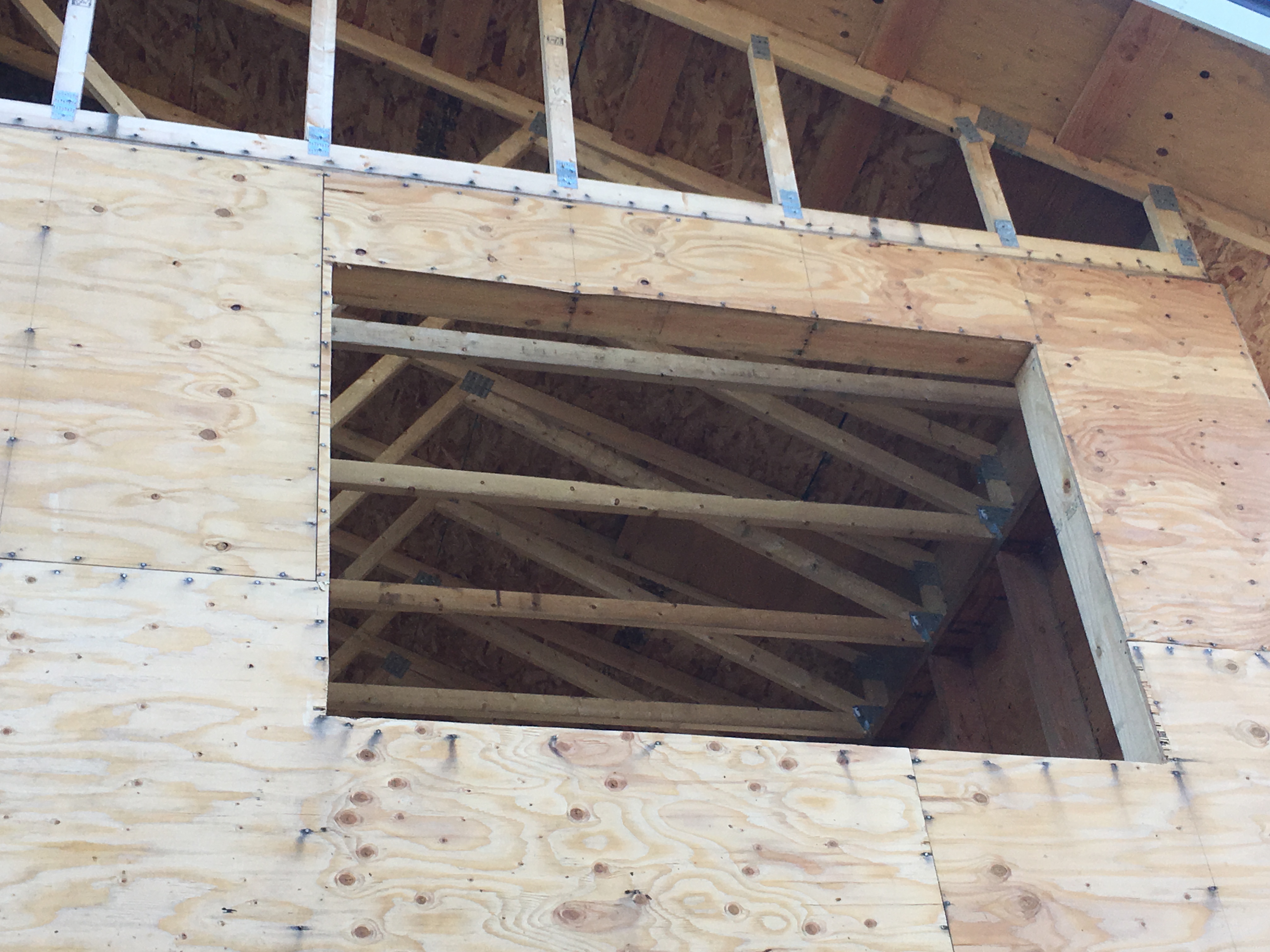 I also cut out an opening for the main electrical panel, which will be partially inside the wall.  Just enough of it will be sticking out to ensure that the panel can be opened from the exterior of the house.  You can see here how I had already planned the location of the panel prior to pouring the foundation because I had to locate the underground service entrance conduit in just the right spot.  Some houses have overhead service cables but in my neighborhood the electricity comes from conduit running underground.  If you aren’t familiar with the term, conduit is a pipe for electrical wiring. 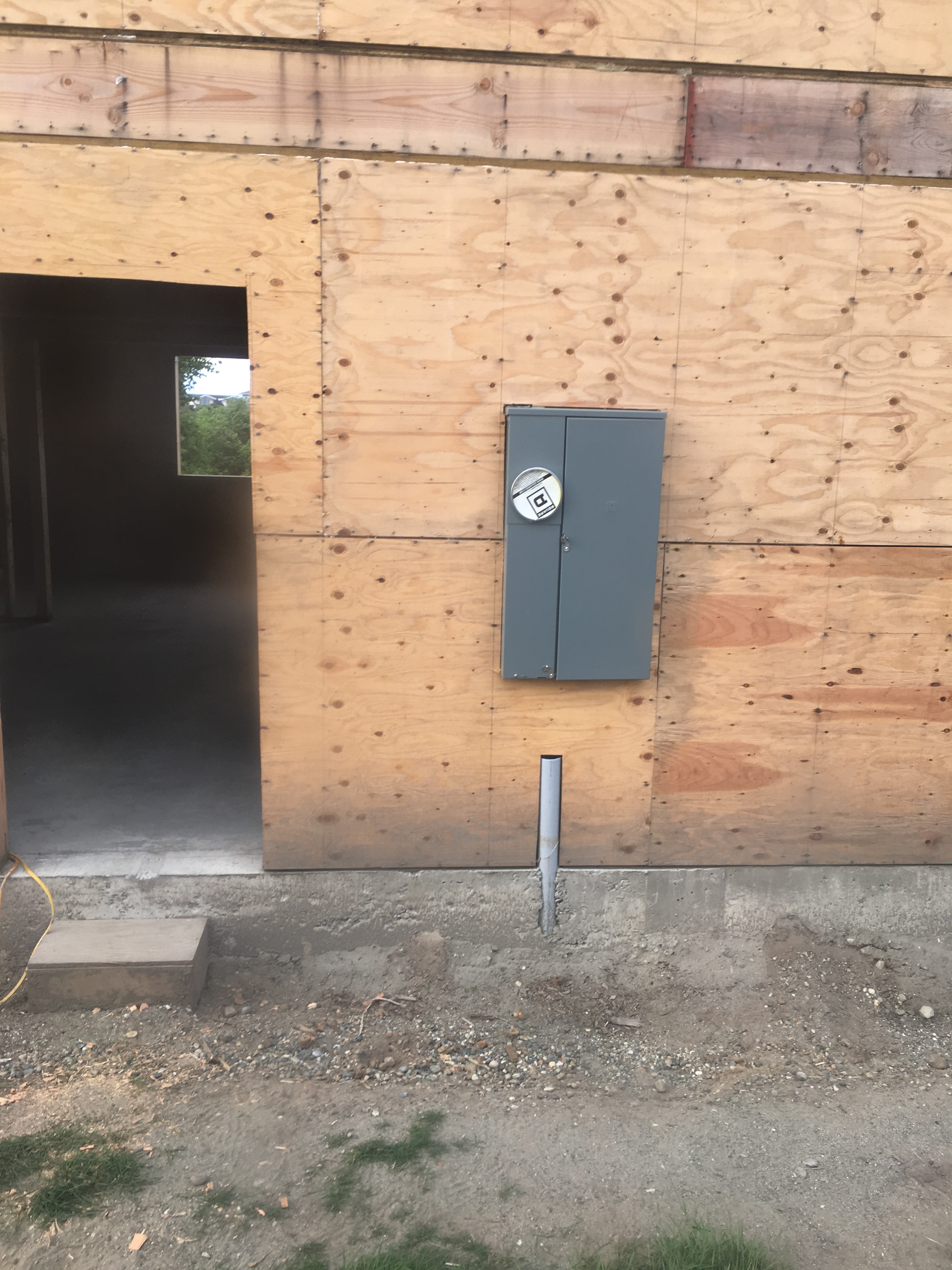 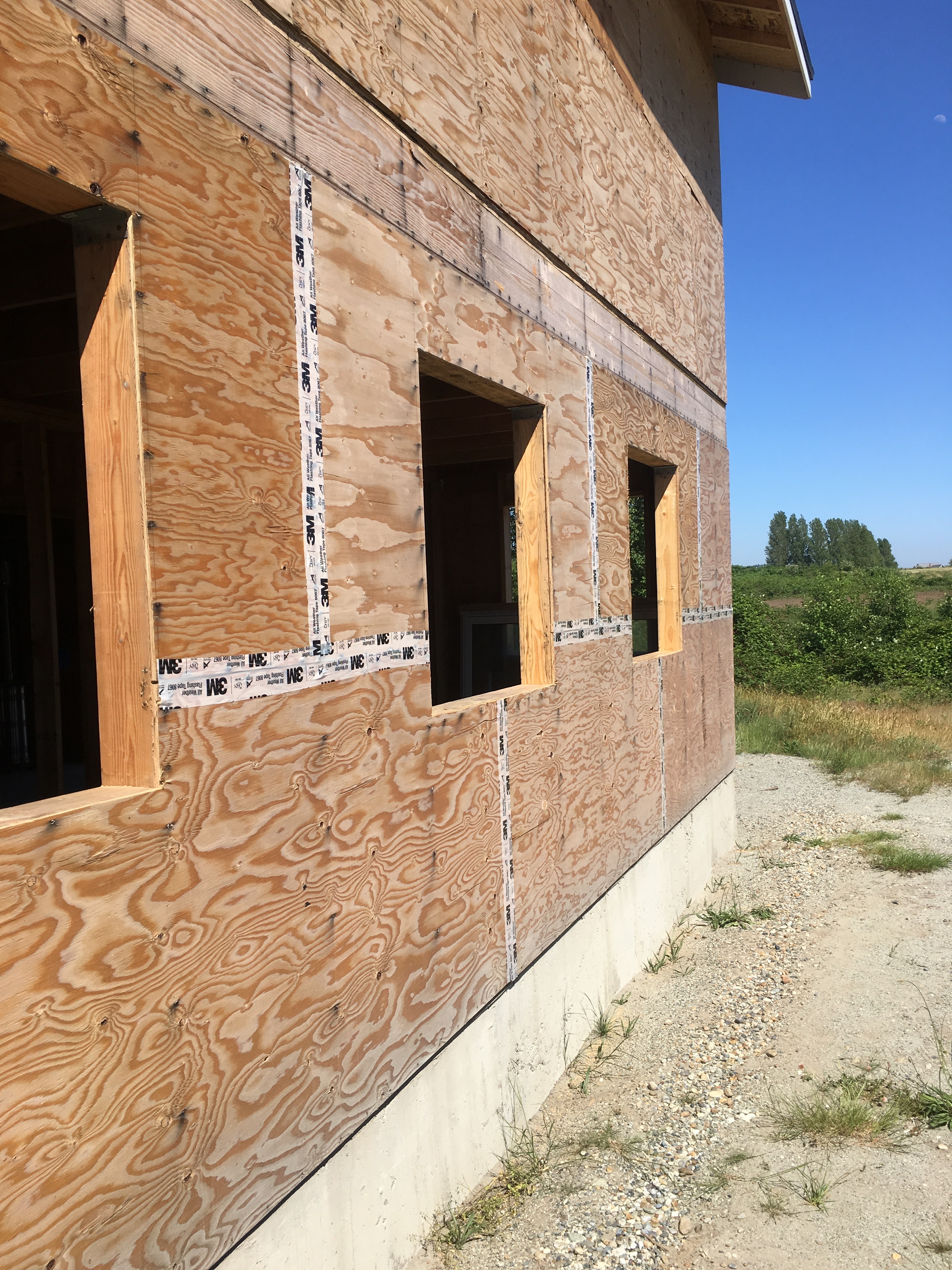 The area between the plywood and main conduit had to be taped as well.  You can see how I had to bend the conduit just a little bit to line up with the proper location in the main panel before taping everything up. 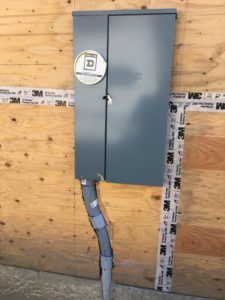 You may have noticed in the photo above that while I had sheathed both the second floor and first floor exterior walls with plywood, there was still a space in between the two sets of sheathing that needed to be filled.  Using the extra plywood from the window cutouts was a great way to reduce wasted material.  I used the smaller pieces first, and cut them precisely to fit in between the sets of sheathing and nailed them up.  Those seams had to be taped up as well.  I also nailed some galvanized metal z-flashing at the very bottom of the plywood sheathing.  Called a z-flashing due to its zigzag shape, the metal has a vertical leg that attaches to the plywood, a horizontal leg that extends outwards underneath the foam (as you can see below), and then a second folded vertical leg.  Having “sticky” properties known as cohesion, water has the ability to defy gravity.  A good example of this is how morning dew “sticks” to the bottoms of leaves.  If it wasn’t for this last vertical leg, water would travel along the top of the horizontal leg until the end and then return on the bottom of the same leg back towards the house. 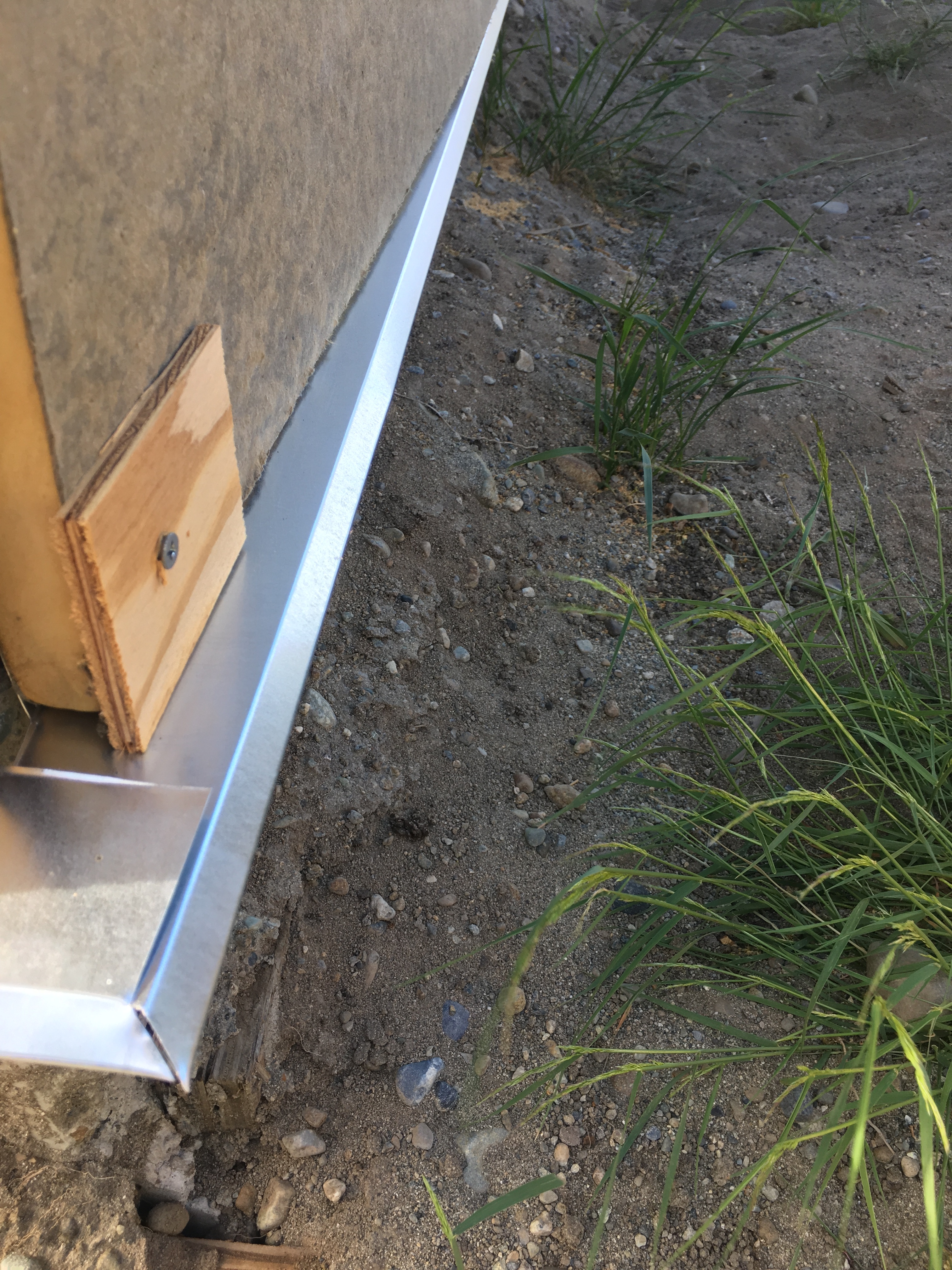 On top of the plywood and z-flashing, I attached large sheets of polyisocyanurate foam.  With an R-value of 5.7 per inch, this is a vital step in building a net-zero home.  R-value is the inverse of U-value, which is a measure of how well a material conducts heat through it.  So R-value could be considered a measure of how poorly a material conducts heat.  The vast majority of houses only have insulation installed inside the exterior walls, in between the wooden studs that make up the structure of the wall.  This allows up to 30% of the heat in the home to be lost through the studs, which only have an R-value of 1 per inch compared to the insulation, which has an R-value between 4 and 6 depending on what type of insulation is used.  In a wall built with 2×6 studs like mine, that is an R-value of 6 for the wood studs and 25 for the insulation!

If you look at the framing of an average house, you see that a ton of extra wood is often added for no reason, which increases the ratio of R-6 wall areas to the R-25 wall areas.  More R-6 areas compared to R-25 areas mean more heat will be lost through the wall resulting in higher utility bills.  This is why I used advanced framing to build my net-zero home, and it is also why I am encasing the exterior walls with a layer of foam, in essence turning it into a giant foam cooler.  The foam will prevent heat loss from the house via thermal bridging, where the heat escapes the interior wall insulation layer by escaping through the studs.  I planned the locations of the sheets so that there weren’t any seams above or below window openings.  This will improve the strength of the foam in these areas.

The foam will eventually be held in place by long 1×4 strips of wood (furring strips) that will extend vertically up the walls of the house, but I couldn’t attach them yet because the wood strips will also be holding the WRB.  This barrier is sometimes called Tyvek because of the popularity of a brand, much like some people refer to tissues as Kleenex.  It allows water vapor to pass through it, but sheds liquid water.  This is an important feature because due to pressure differences and humidity, water vapor can pass through the walls of the house, and the last thing you want is to trap that vapor inside the wall.  You want to allow it to escape or it will eventually cool inside the wall, condense into water, and damage the home.  I temporarily used pieces of scrap wood I had leftover from framing the house to hold the foam in place until I could install the Tyvek over it.   I marked out specific locations to attach these scraps so they would be screwed down in the exact locations where the furring strips will eventually be screwed in.  This will lessen the amount of damage that is done to the foam insulation by the screws.  I used the same all-weather flashing tape to connect the seams in the foam, again to reduce air infiltration.