mbath Posted on September 16, 2018 Posted in Building Your Own Home, Do Your Own Electrical Work, Wiring Your Own Home No Comments Tagged with Circuit, Conductor, Ground Wire, Raceway, Receptacle, Romex, Stud

After all of the wires have been run between the main panel and the outlets, all the wires must be secured to the framing.  The wires must be attached within 6″ of the outlets and at least every 54″ until they reach the main panel, where they must be secured as well.  There are many products you can buy to properly secure the wires but I went with the cheapest one and just used electrical staples.  These allow you to staple two 2 conductor wires or one 3 conductor wire, and are very easily driven into the framing with a hammer.  You must take care not to hammer them in so hard that they break the insulation on the wire.  On long raceways, it is important to separate the wires when possible to prevent them from overheating. Wires can’t be stapled closer than 1.25″ to the edge of the framing, and if they go through a hole that is closer than 1.25″ from the edge of the framing, metal plates must be attached over the hole.  This way, if someone decides to hang something on the wall, they will be less likely to nail or screw into the electrical wiring. 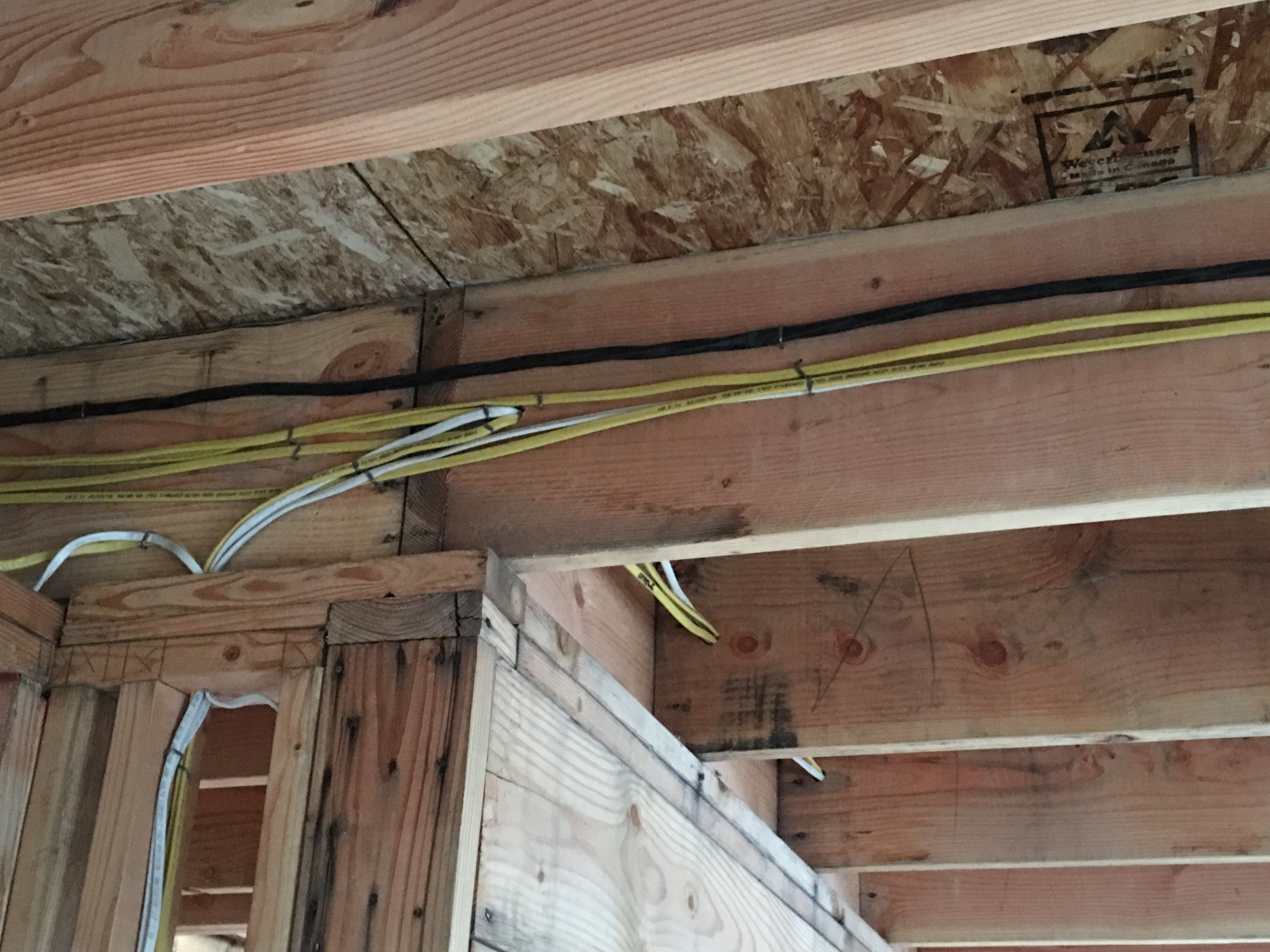 Once the wires are secured, it is time to make up the boxes.  I used a sharp utility knife to cut a long slit in the sheathing on the Romex, exposing the conductors.  If you cut the side that has the writing on it, the paper wrapping will be a lot easier to remove.  It is important to cut the sheathing off at the very back of the box.  Sometimes when there are multiple wires it helps to write which one is which on the nearest stud. 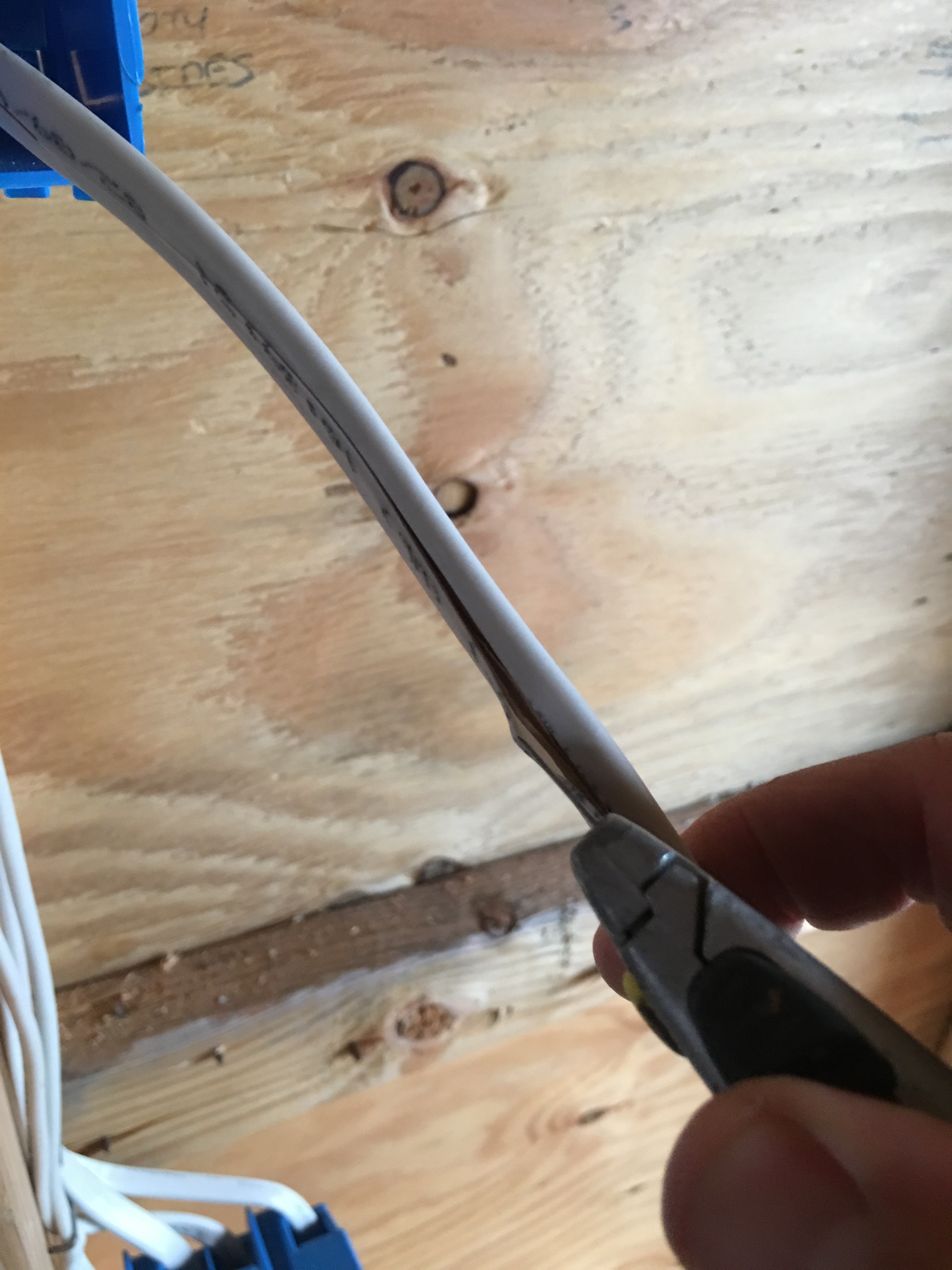 The easiest box to make up is a receptacle at the end of a circuit.  You just strip the sheathing and paper away and leave the conductors and ground wire neatly folded near the front of the box.  Easy! 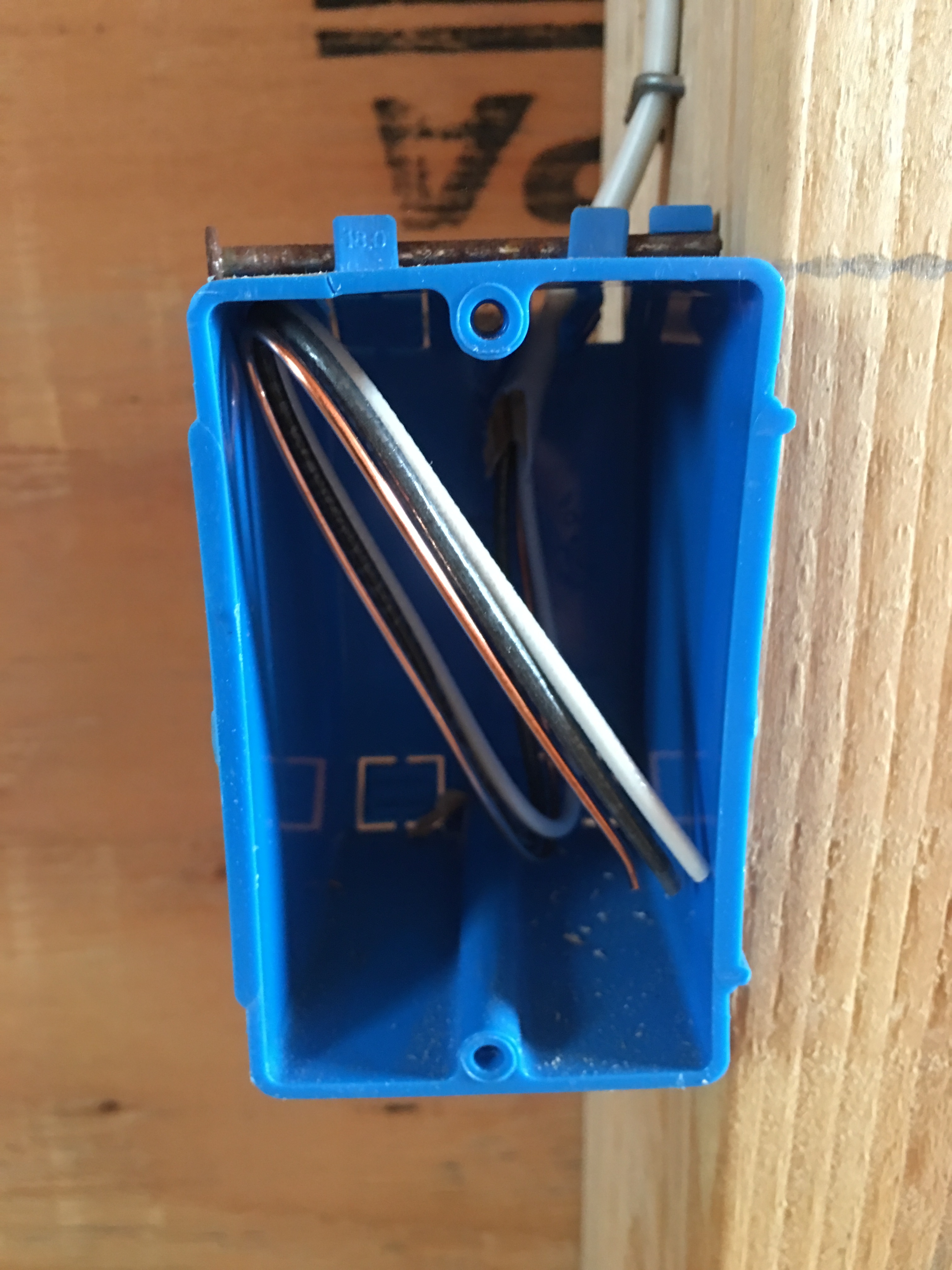 The next simplest is a switch at the end of the line.  This is done just like the receptacle except you need to wrap black electrical tape over the white conductor to show that it is “hot” (look closely and you can see the tape covering the left wire in the front of the picture but in the very back of the box it is not taped and you can see that it was white).  Also, I like to use some leftover Romex sheathing to mark that the outlet is a switch. 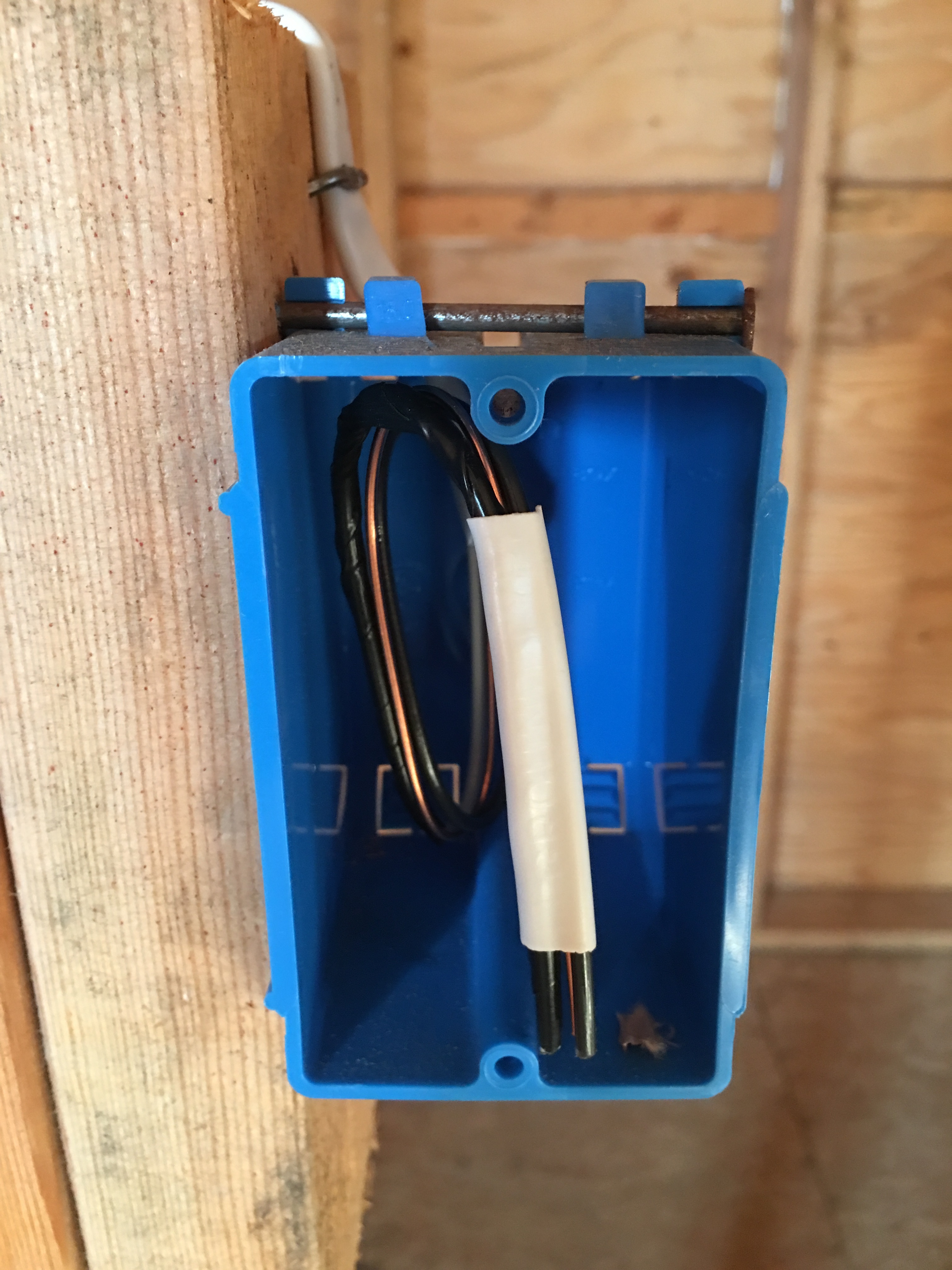 All the rest of the boxes will have more than one wire.  It is easiest to start with the ground wires as they will be pretty much the same every time.  If there are only two ground wires I twist them together 6 or 7 times.  Then I slide a crimp ring over them and use a pair of crimpers to pinch them tightly together.  Next, I trim off any unnecessary ground wires (leave one remaining for each switch/receptacle in the box). 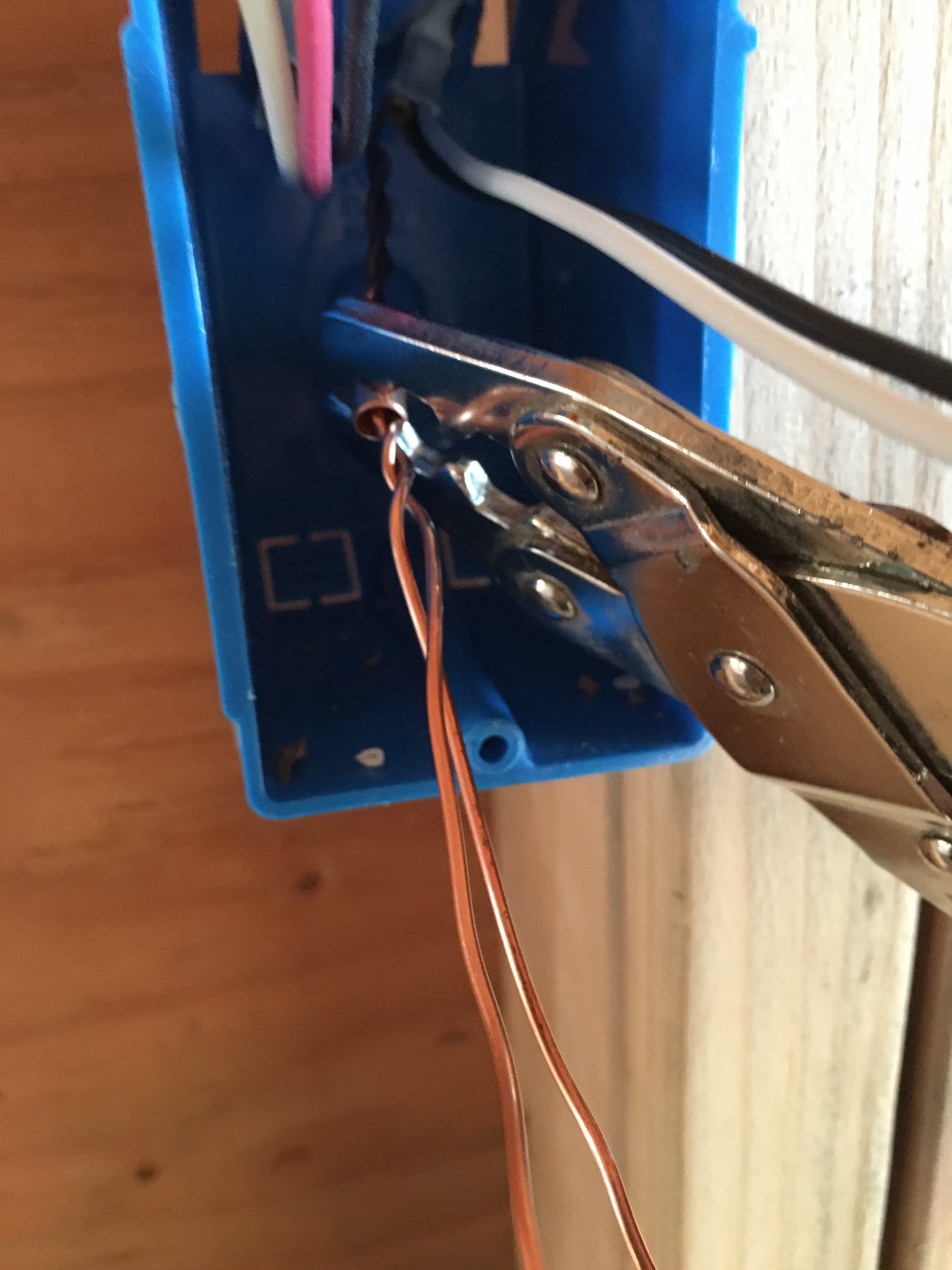 White conductors come next.  If you are wiring a switch, make sure that none of them need to be taped to mark them as “hot”.  This is usually due to power going to a light before the switch that controls it.  One simple way to determine if a white conductor needs to be marked is to keep in mind that if you mark a conductor, you must also mark it on the other end, at whichever box the wire terminates at.  If you find yourself trying to connect a black conductor to a white conductor without a “load” in between you will know right away you are doing something wrong (a load is any device that utilizes the electricity, in this case most likely a light).  Each receptacle requires a white conductor, but switches don’t have any.  If there are only two white conductors, you can attach both of them to a single receptacle.  If there are more than two, you must grab an extra length of white wire and attach it to the rest of them with a wire nut.  This is known as a pigtail, and in this case accomplishes the task of turning multiple conductors into a single conductor.  If no white conductors are needed, such as for a switch, you can simply tie them together with a wire nut. 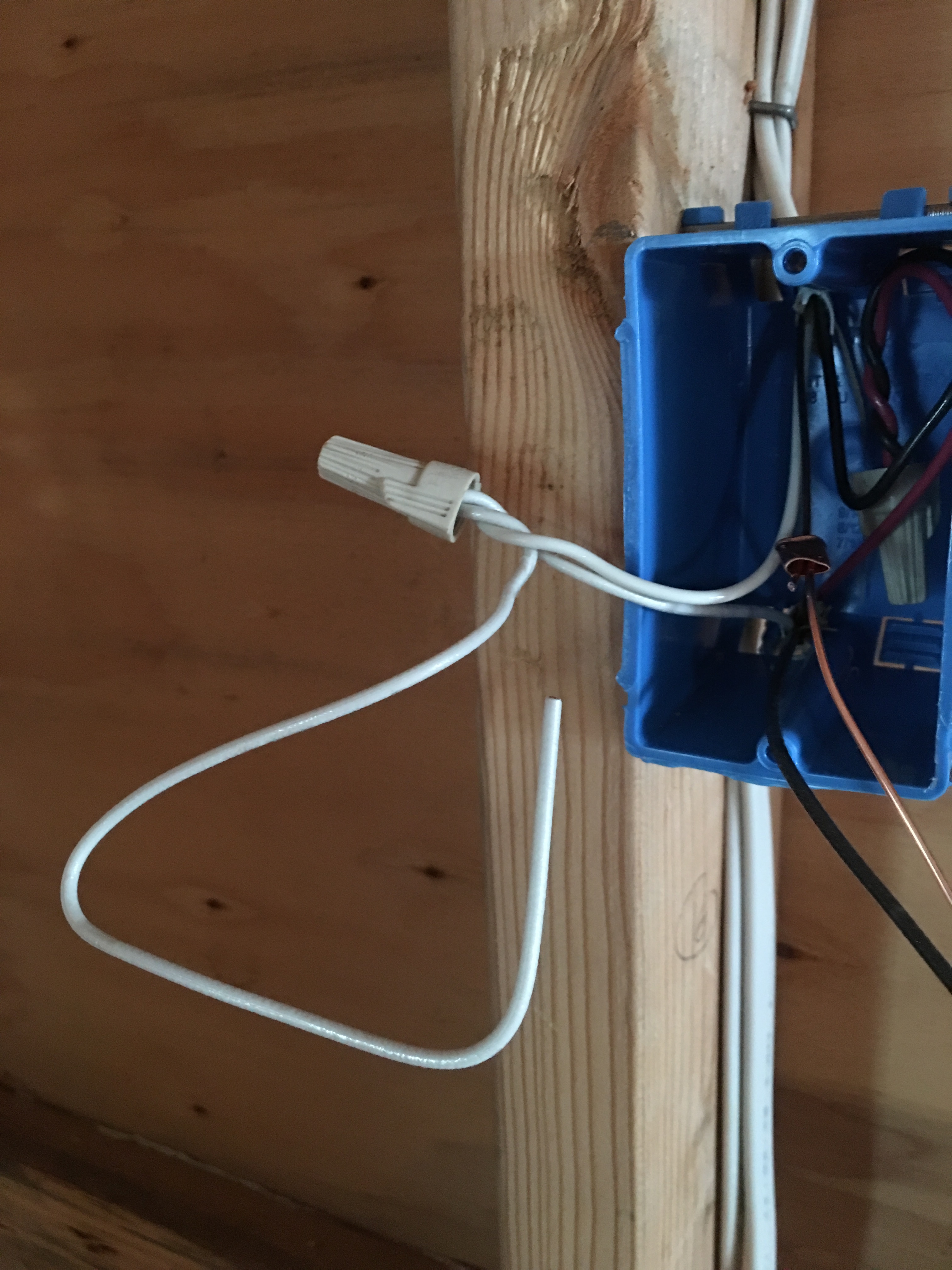 The black and red conductors are the most difficult, and this is where it becomes very important to have written down which wires are which.  Receptacles require one black conductor, while switches require two.  Just as with the white conductors, if you have only two black conductors , you can attach both of them to a single receptacle.  For switches, one of the black conductors will need to be incoming power, and the other one will need to be going to the load.  When there are multiple switches, you will need to use a pigtail.  This time, instead of using a pigtail to turn multiple conductors into a single one, you will use the pigtail to turn a single wire coming from power into multiple wires that can each power a different switch.  Sometimes, you will have power entering the box pigtailed to multiple switches, but you will also need to add to the pigtail other black conductors that will bring the power out of the box and into the next one.  It is really important that you pay attention to the packaging for the wire nuts you are using for your pigtails to ensure that it is the right size for the amount of wires in the pigtail.  I find the tan ones (pictured above) are best since you can do two to five 14 gauge conductors, but I did have to use a larger one a few times when I had to pigtail six (pictured below). 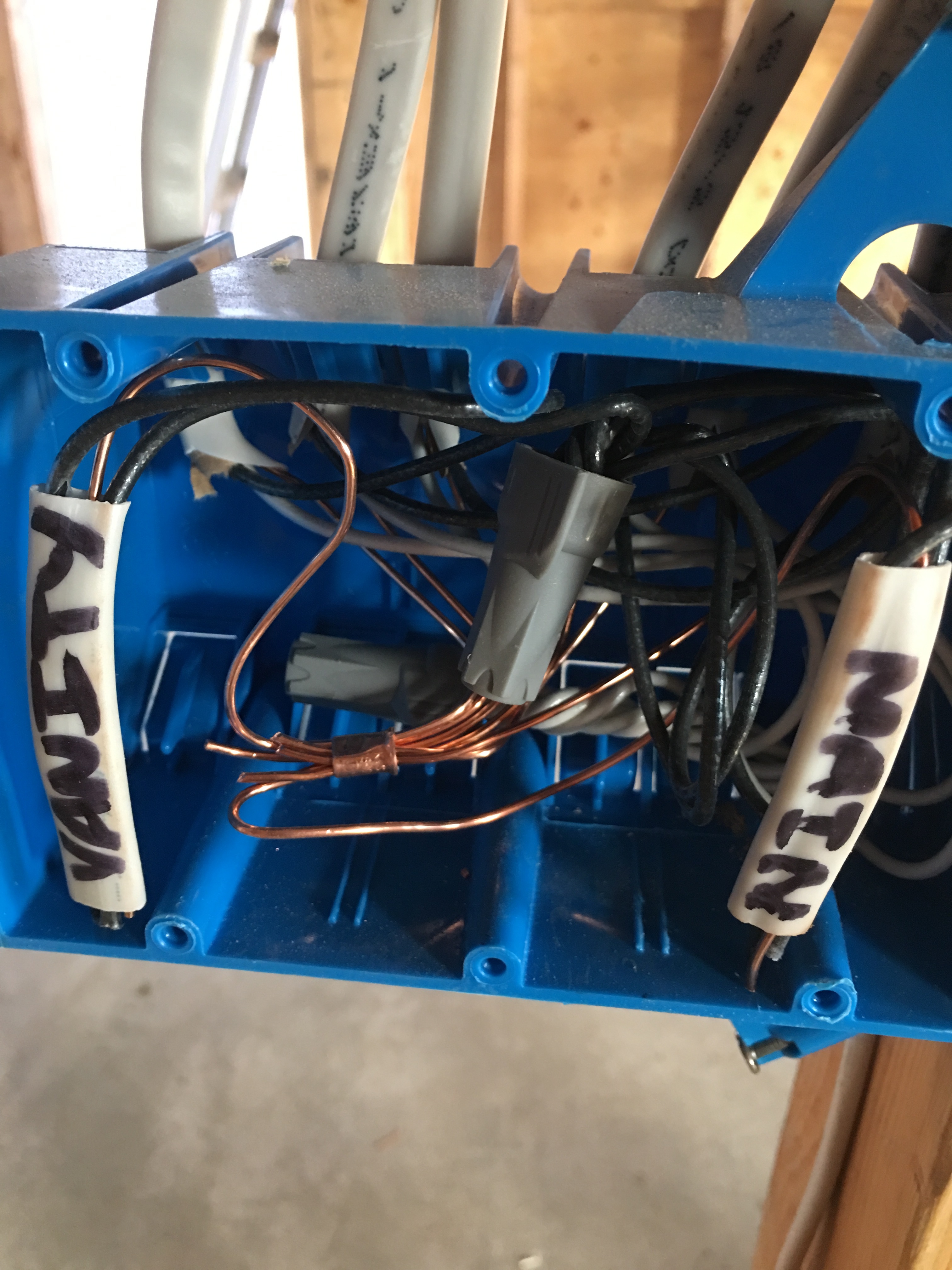 When you have a 3 way switch, there will be two conductors that go from the switch to the load.  Wrap the extra conductor (usually the red) around the sheathing to mark that the switch is a 3 way.  Here you can also see that I have labeled the switches (one for the porch and one for the foyer) so I don’t forget which is which. 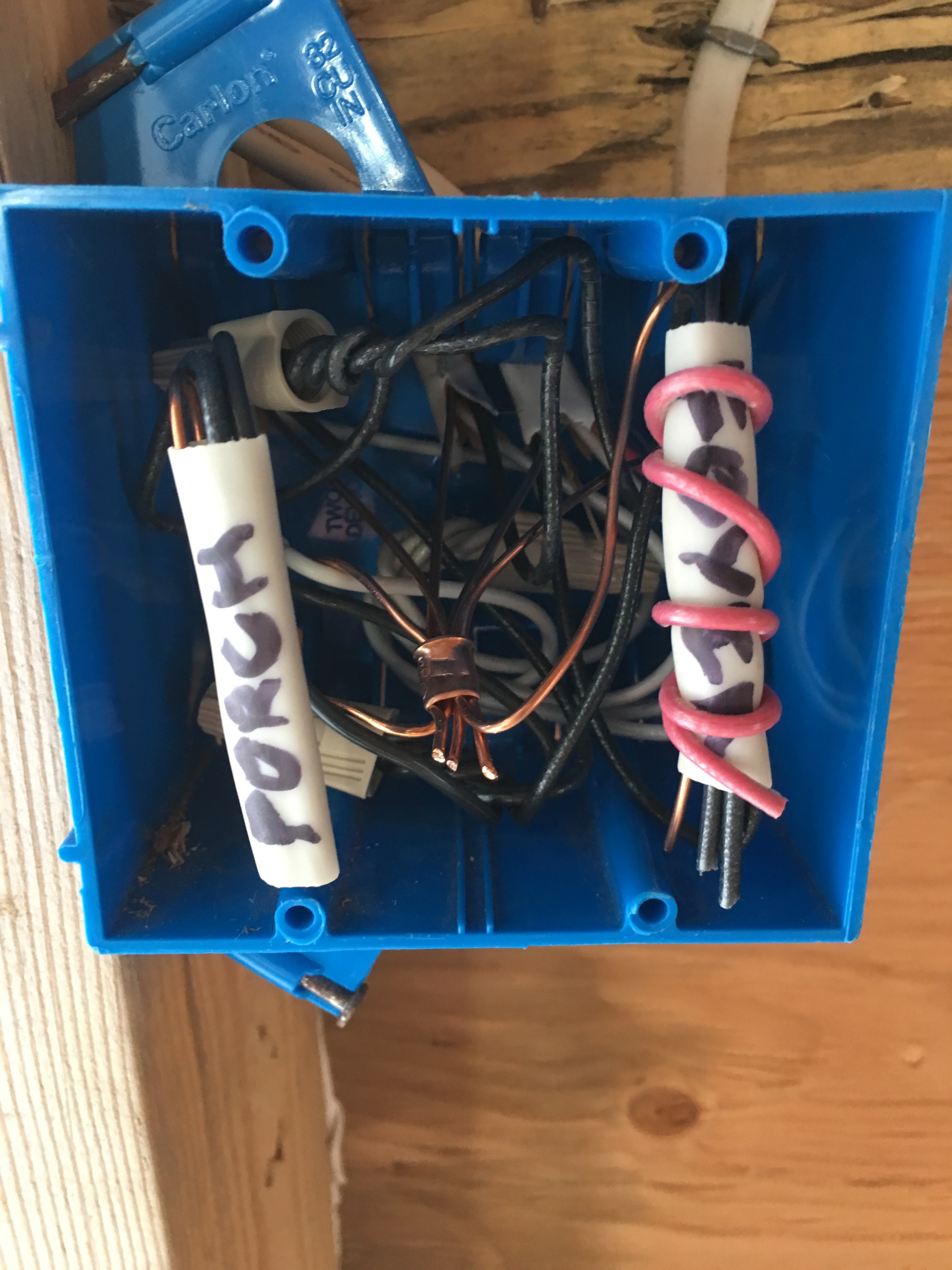