Saving Sustainably » Building Your Own Home » Step 3b – Wiring and Inspection

Step 3b – Wiring and Inspection 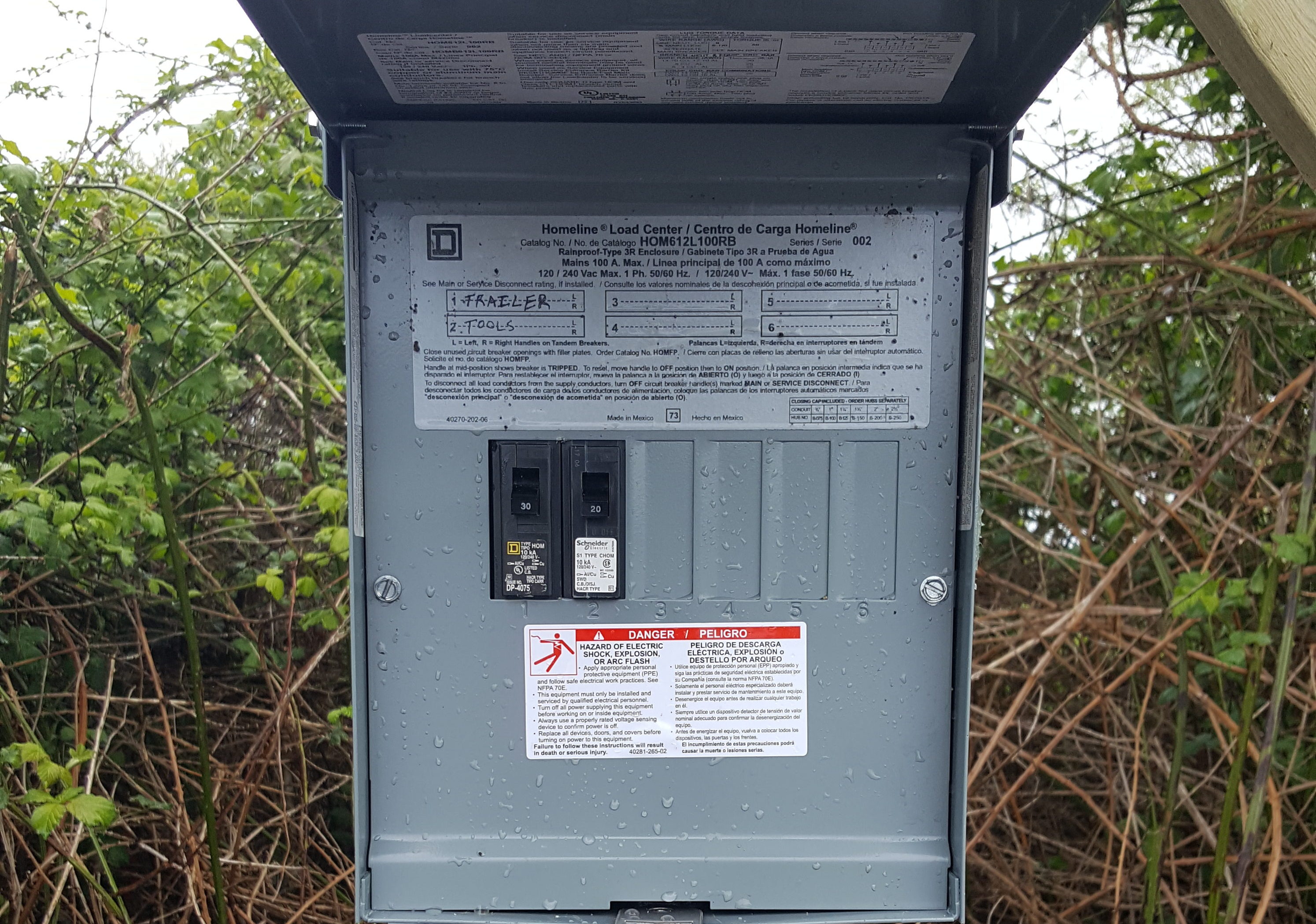 Electrical wiring seems very complicated but its actually pretty simple.  The catch is that a mistake could possibly kill you.  Fortunately, when building your own home, the power isn’t hooked up yet so you don’t have to worry about that.    The basics behind modern electricity can be pretty complicated, but here is a quick rundown.  Standard residential service uses alternating current with two 120 volt currents running in opposite phases.  Think of it like two pedals on a bicycle.  They are on opposite sides of each other but they can work together when you need them to.  Large appliances that need all 240 volts available can use a double breaker and take advantage of the added power.  Most normal circuits just utilize one phase or the other depending on where the breakers are situated in the panel.  As you can see in the photo at top, I have one 30 amp circuit powering the trailer using one phase and a 20 amp circuit for my tools on the other phase.  Within a couple weeks I hope to add two additional circuits on opposing phases to power my septic system.

As for the wiring of these circuits, the first step was to bring power from the utility company’s stubout to a meter socket.  The utility company will splice these wires to the ones they have in the stubout and put a meter in the meter socket so they can properly bill me for the power I use.  They are not allowed to complete these tasks until I have a sticker placed on my panel by the state electrical inspector.  In many states the building inspector does the electrical inspections but in Washington they are completed by the department of labor and industry.  According to the NEC (National Electric Code), you need to use size #4 copper or #2 aluminum wires to power a 100 amp service like the one I am installing.  Because these wires are run underground, they are required to be URD (underground residential distribution) conductors.  I used aluminum because it was cheaper.  Three wires are used, one for each phase of the AC current and one for the neutral wire where the power returns.  Think of electrical power like a river powering a water wheel.  If there is no place for the river to flow it won’t move and the wheel won’t move either.  Likewise, electricity won’t work unless it has a place to go and the neutral wire provides this path.

From the meter socket, the same URD wires are used to run the two “hots” and one neutral to the breaker panel.  Inside the panel, clamps are provided that connect to large metal plates for the “hot” wires, and a long metal bar for the neutral wire.  For every circuit, a breaker is connected to one of the metal plates and a white neutral wire is connected to the metal neutral bar.  The hot wire for the circuit is then connected to the breaker and the circuit is complete.  As you can see, I have one circuit to power the trailer that connects to a 30 amp breaker and one for my tools that connects to a 20 amp breaker.

There is a third wire on each circuit that is called the ground wire.  This wire is a relatively modern innovation for safety reasons and isn’t necessary to power either of the circuits.  Many elements have the ability to conduct electricity, including the human body, and electricity acts just as water does in that it will take the easiest path available.  A properly grounded electrical system provides a path with very little resistance so that, in the instance of a wire coming loose and briefly contacting a surface that conducts electricity, the surface charge will continue through the grounding system rather than remaining on the surface and electrocuting the next person that touches it.  The ground wires on the circuit are connected to a “grounding bar” inside the panel that is also connected through a copper wire to a 10 foot long copper rod that is buried all the way down into the earth.  Using our water analogy, this would be as if there was a water slide leading to a pool.  Some of the water might splash up onto the sides of the slide, but gravity is going to eventually draw it down into the pool.

So that basically covers the wiring of the system.  The hardest part is deciphering the NEC to figure out what type and size of wires to use.  There are many different kinds of conductors (THHN, THWN, XHHW, URD) which are basically single insulated wires, and then there are many different kinds of cables (UF, NM, SE, USE) which are several conductors independently insulated and bundled together and then given a second layer of insulation.  With the wiring completed, I was able to call an inspector in and he passed me off and put a yellow sticker on my service panel.  The utility company won’t connect the power without the sticker but now that I have it I can call them up and get connected.

2 Comments on “Step 3b – Wiring and Inspection”