The whole point of working on the plumbing first was to make it easier to install the shingles.  I will be using interlocking aluminum shingles due to their proven record of longevity and ability to stand up to the high winds and salty air of Point Roberts.  As an added benefit, the shingles are made from 95% recycled material, and they reflect heat back into the building rather than absorb it like most roofs.  One of the few downsides is because they are interlocking, the only way to adjust one of the shingles in the middle of the roof is to start removing them from the top corner and continue removing them until you get to the one you want to adjust.  Obviously that isn’t something I want to take a chance on having to do, and if I tried to just drill through after they were installed they would get bent.  The best way to do it is to complete the DWV system and install the vents through the roof before installing the shingles. 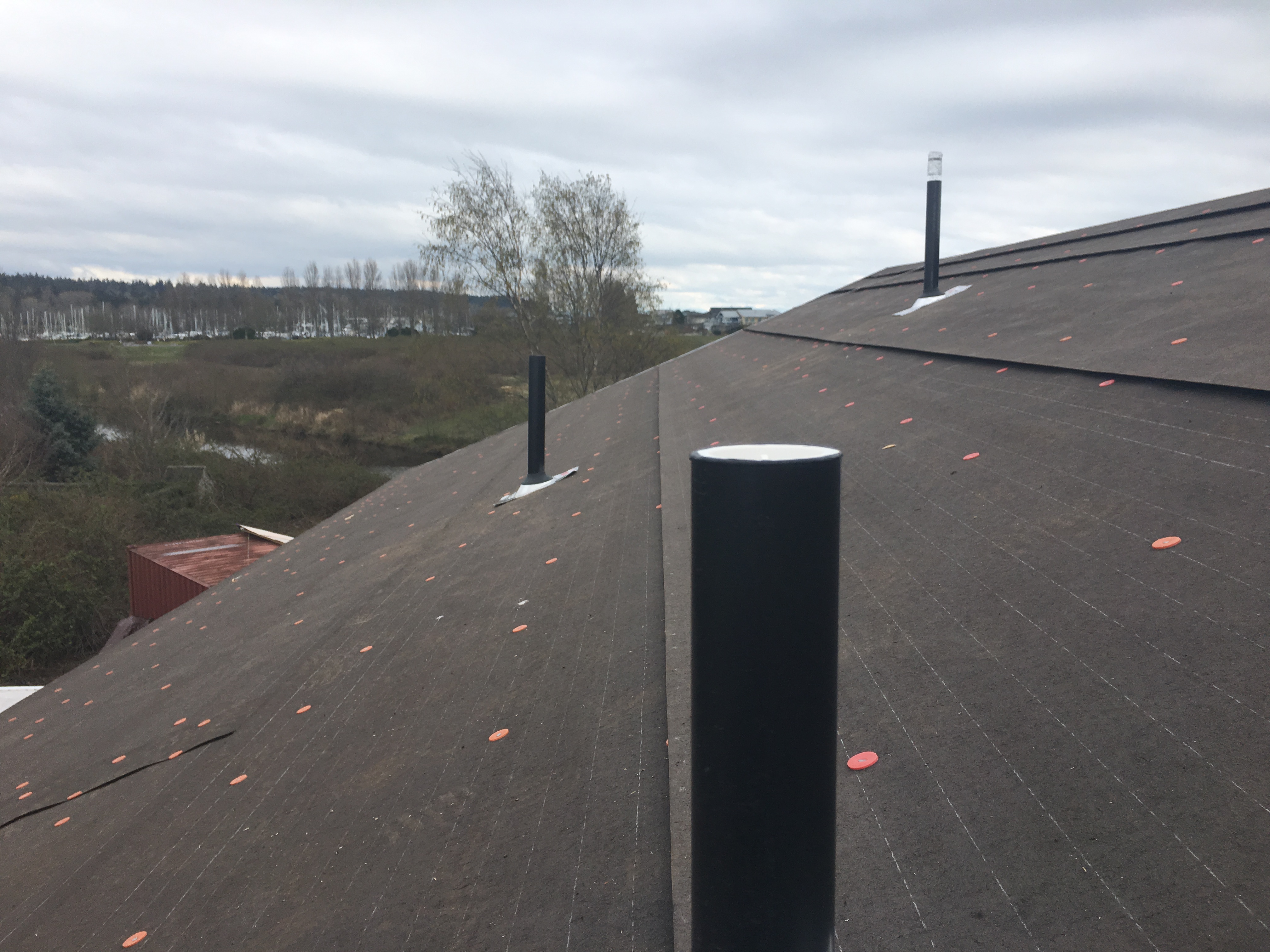 According to building code, plumbing vents must extend a minimum of 6 inches above the roof.  Due to the slope of the roof, an oval shape must be cut out to accomodate the round pipe.  Once the three vent pipes were brought through the roof, I glued test caps onto the two lower vents but left the highest one open.  This completed the DWV system so that every single outlet was capped and sealed.  Now it was time to test it out to ensure there weren’t any leaks.  I dragged a hose up to the uncapped vent and filled it up all the way to the top to ensure the entire system was filled.  Then I turned a full water bottle upside down and placed it over the top.  This gave me a reference to look at to check for leaks.  If you can no longer see the water in the bottle then there is obviously a leak somewhere.  Fortunately, I had done an adequate job cementing all the ABS together and there were no leaks.  The test caps will remain in place until the water supply system has been installed and tested, at which point I will be ready to have the building inspector come by to check everything.

The only other roof penetration will be for the electrical connections to the rooftop solar array.  I will be using a Soladeck to perform the jobs of both protecting the roof opening as a flashing and housing the electrical connections all in one.  Whereas the pipe penetrations needed to be placed at just the right positioning to ensure a straight extension up from the drains, the Soladeck can be positioned pretty much anywhere.  I decided the best spot would be near the top of the solar array at the center of the roof ridge.  The key was to position it so several of the screws would attach to one of the trusses, which will provide a much stronger connection than just attaching it to the roof sheathing.  With all of the roof penetrations complete, I was ready to install the shingles.