mbath Posted on February 4, 2018 Posted in Building Your Own Home, Do Your Own Carpentry, Framing a House 2 Comments Tagged with Building Inspector, Gable End, OSB, Sheathing, Subfloor, Trusses

I had been waiting for today for almost a month!  It has been so frustrating to watch the second story OSB subfloor get wet day after day, but today I took a big step towards getting a roof over it as I installed the first row of roof sheathing.  With all the inclement weather, I had spent plenty of time figuring out how to get the roof sheathing installed as safely and efficiently as possible.  Carrying a 4 foot by 8 foot sheet of OSB is hard enough on the ground, so the thought of bringing it 20 feet up a ladder didn’t sit very well with me.  My solution was to buy a cheap winch online and build some “rails” so I could simply stand on the trusses and crank up the OSB like I was reeling in a fish. 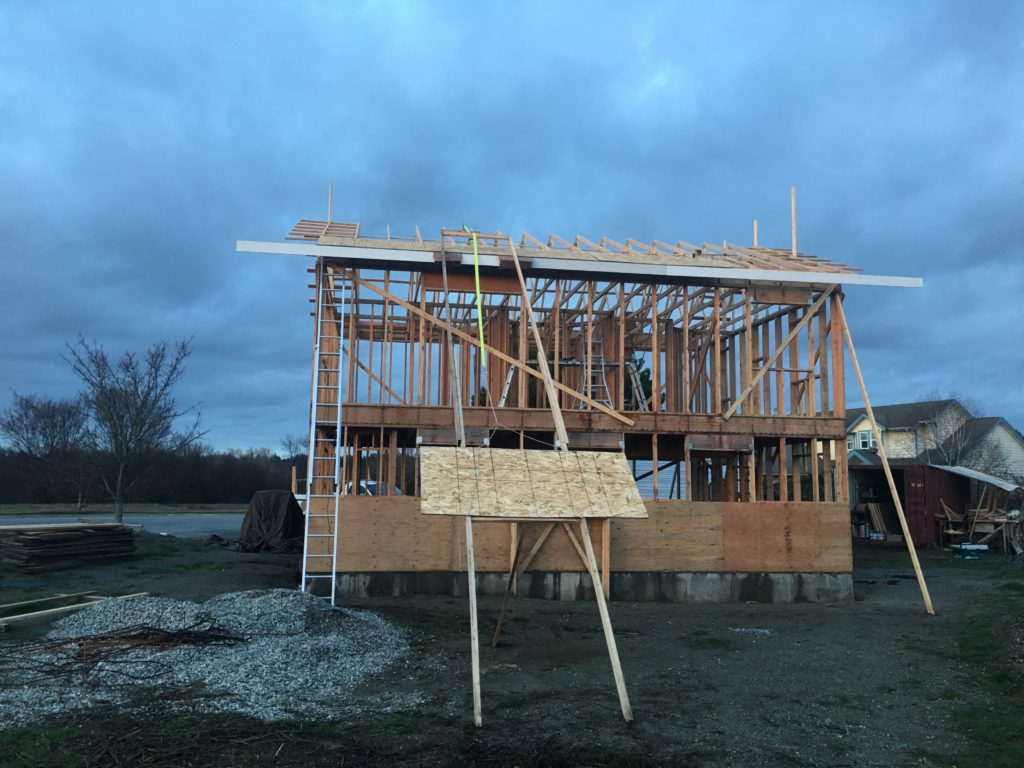 It worked like a charm!  The webbing that came with the winch wasn’t long enough but I had some extra rope that worked just fine.  Before I started reeling the sheathing up to the roof I used a chalk reel to snap a line 4 feet up from the fascia.  The goal is to have the top edge of the OSB sheathing line up directly over the top of the fascia.  With that done I brought up the first panel and matched it up with my chalk line.  Just like the subfloor, the roof sheathing must be nailed to the trusses every 12″ on the inside parts of the panel and every 6″ on the edges.  I used my tape measure to ensure that each truss was on layout 2 feet center to center before nailing down the OSB. Once the sheathing is nailed down the trusses aren’t going to go anywhere so this was my last chance to make sure they were nice and straight. Before installing the next row of panels, I installed an ‘H-Clip’ roughly halfway between each of the trusses, as shown above.  These will ensure that there is enough space left between the panels to allow them to expand and contract due to heat and moisture.

Here is a more closeup look of the clip.  Once they were installed I repeated the steps on the next layer of sheathing.  When I had reached the top layer, I measured to the top of the ridge of the roof and ripped the panel down to size so it would end at the ridge line.  I moved in six inches from the edge, and then ripped it down an additional 3 inches.  This will leave a 3″ gap on each side at the top of the roof sheathing for the ridge vent.  The ridge vent will work together with the baffles to properly aerate the attic and dry out any moisture that finds its way in.  As I will show later when I start on the shingles, the gap for the ridge vent will be covered with a material that will allow air, but not moisture, to go through it.  I am currently only halfway through the roof sheathing, but hope to get the rest of it done tomorrow.  The building inspector only comes into town on Tuesdays so if I don’t finish tomorrow I will have to wait an entire week before starting the roof.  The inspector must check up on the roof sheathing, specifically proper nailing of the roof sheathing, before I can start on the shingles. 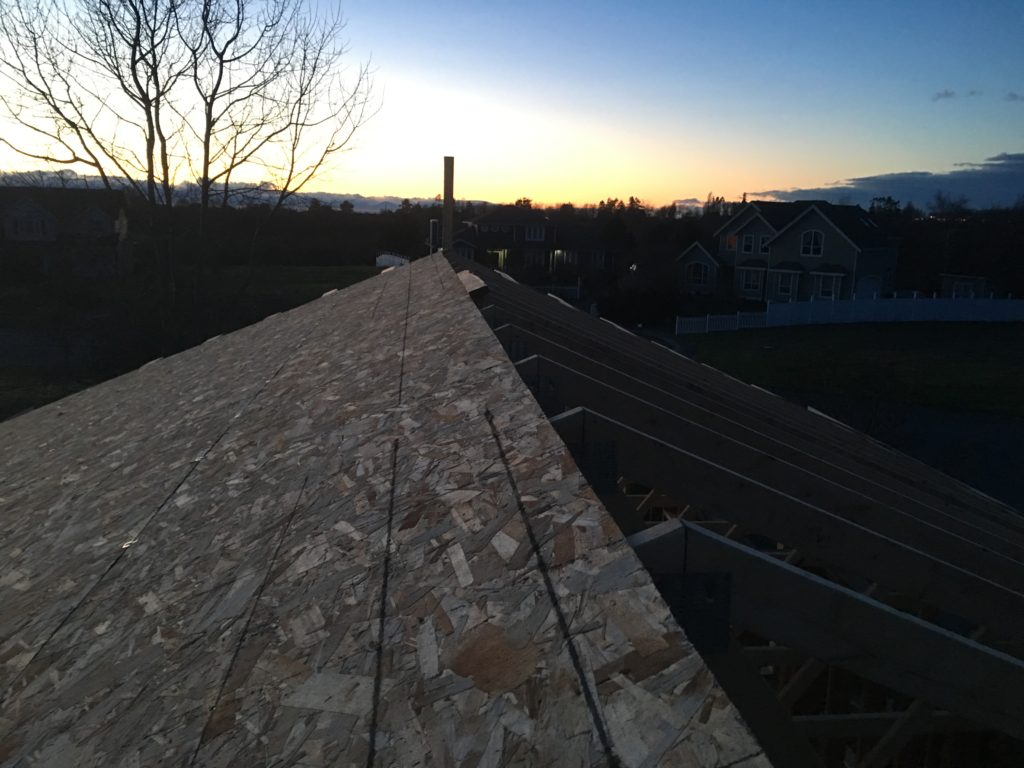