Saving Sustainably » Building Your Own Home » step 9b – Install the Subfloor

step 9b – Install the Subfloor

mbath Posted on December 7, 2017 Posted in Building Your Own Home, Do Your Own Carpentry, Framing a House No Comments Tagged with Blocking, Chalk Reel, Joists, OSB, Scaffolding, Staggering 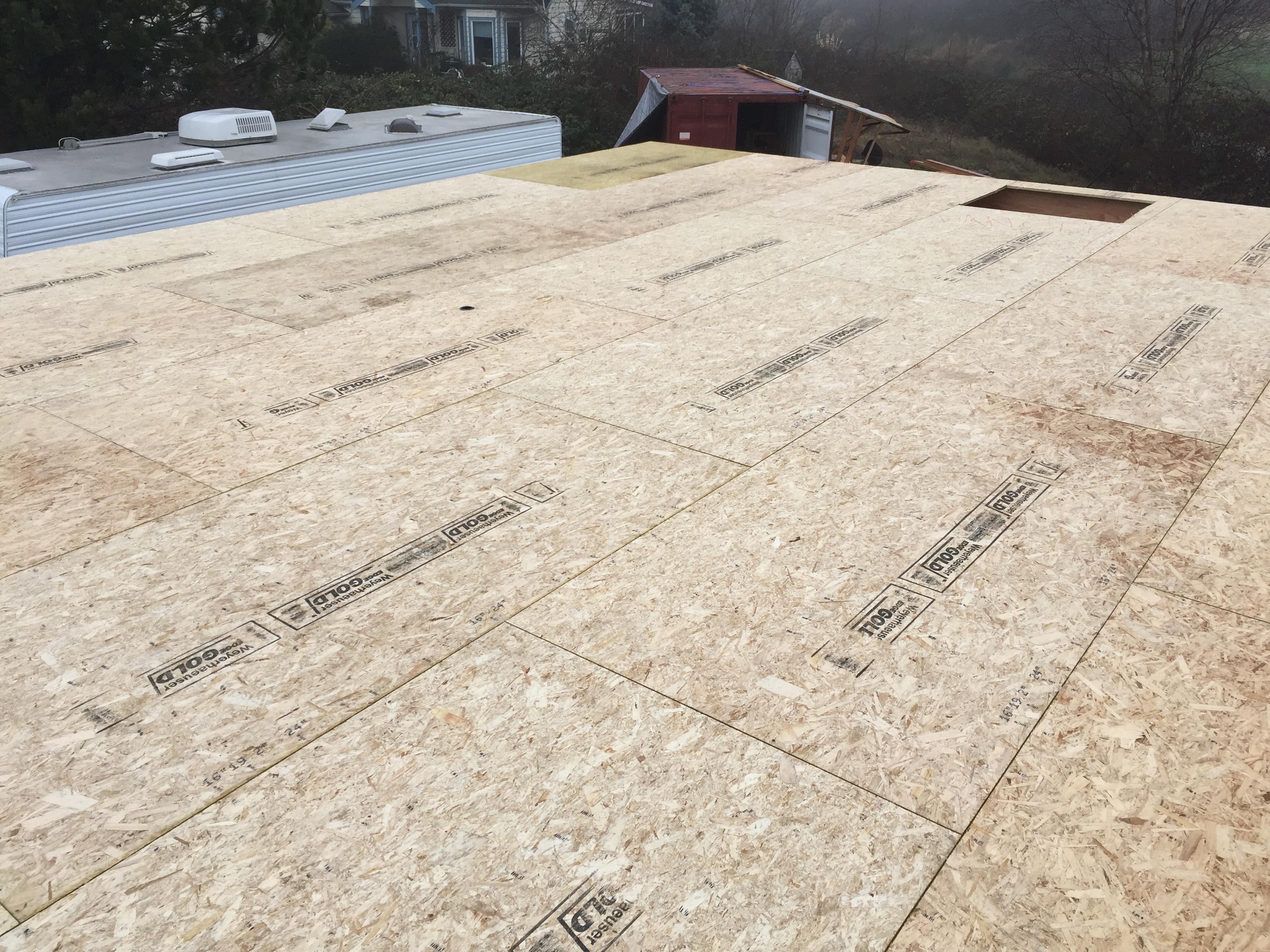 Solving small problems is a huge part of building.  I’ve always enjoyed crossword puzzles and the like, so I shouldn’t be at all surprised that I am enjoying building the house so much.  Today’s problem was how to lift 24 sheets of OSB panels 11 feet up in the air.  (2 feet of foundation + 8 feet of wall + 1 foot of joists = 11)  You see, each panel is 4 feet wide and 8 feet long, and weighs 59 pounds, so not only are they heavy, but it is difficult just to get your arms around one.  My solution was to build a small section of scaffolding about 6 feet long and 5 feet high.  Then I would carry the OSB over to the scaffolding while holding it just like this guy is. 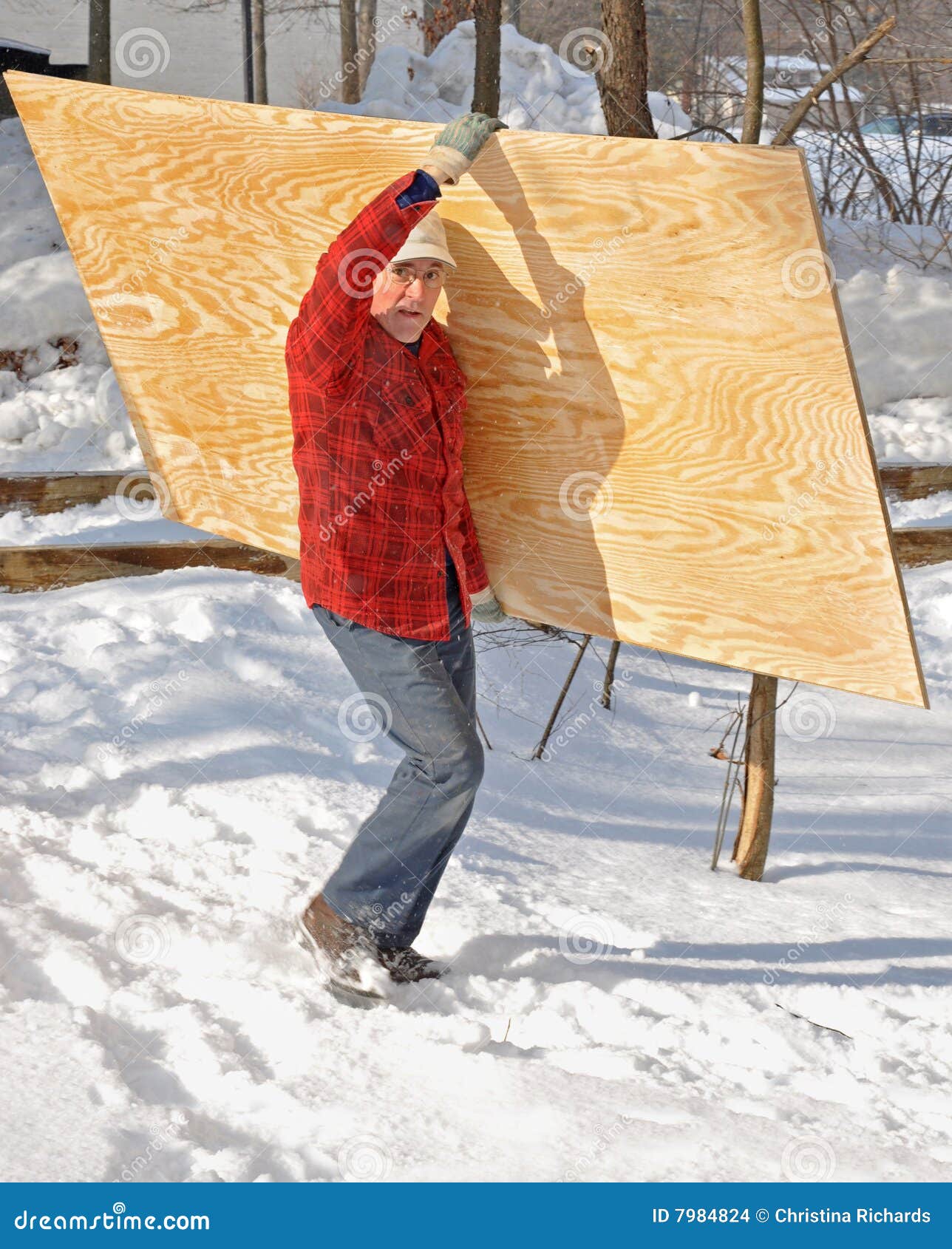 Turning it so the shorter side is down, I then lifted it up onto the scaffolding 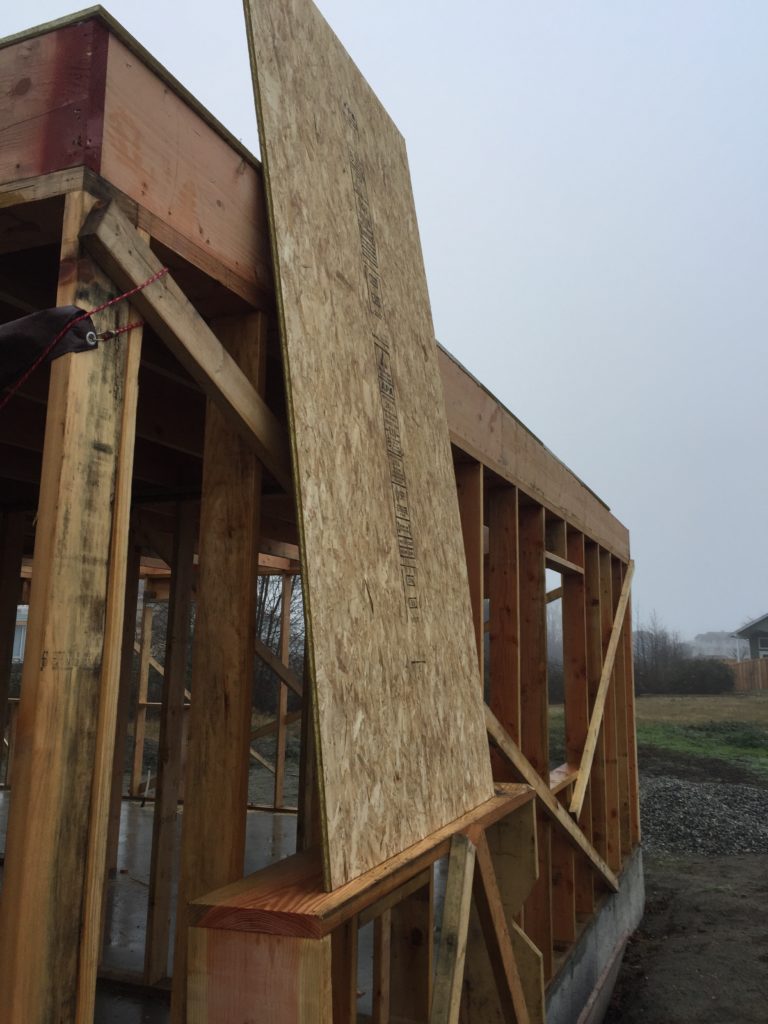 Then I would climb up to the top, grab the end of it and pull it the rest of the way up.  This was easy once I had a couple of them already up there to stand on but for the first ones I had to just stand on a couple of 2×6 boards that I had laid out perpendicular across the joists.  Have I mentioned that building a house is a great way to face your fear of heights?  I lifted every single one of the 24 boards up to the top of the wall in this same manner.  The first row you attach is the most important one to be straight because all the other rows will interlock with it.  I used my chalk reel to snap a line 4 feet in from the edge to ensure that I got it just right.  Next, I applied a liberal bead of elastomeric construction adhesive to the top of the joists.

I set the board down over the joists so it lined up with the one corner of the house and ensured that the other end was halfway onto a joist.  This is the reason why I lined the joists up 24″ on center.  The 8′ long panel spans 4 joists and on the outer joists it leaves enough space to share the joist with another panel.  Once the panel is perfectly lined up the code calls for it to be nailed with 8d common nails every 6″ on the edges and every 12″ in the middle areas where a joist runs under it.  The boards are marked out so you can easily find the spots where these nails should go if the joists were lined up correctly.  If you look closely you can see them… 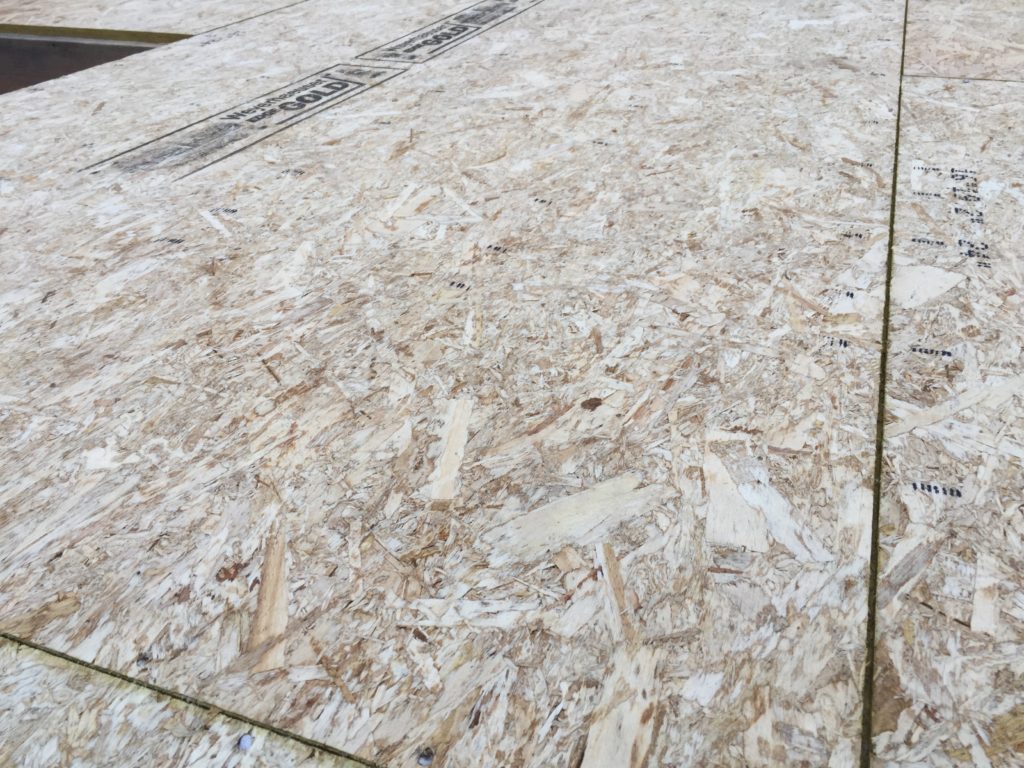 You can also see how I left a small gap in between each board to allow for expansion due to heat and/or moisture.  Four of these 8′ long panels were enough to run down the length of the house.  For the next row, I cut a panel in half.  Staggering the seams in this way adds strength to the floor.  With the first two rows complete you can see how the staggering seams look.  Notice how I positioned the other boards so I could walk around as I worked. 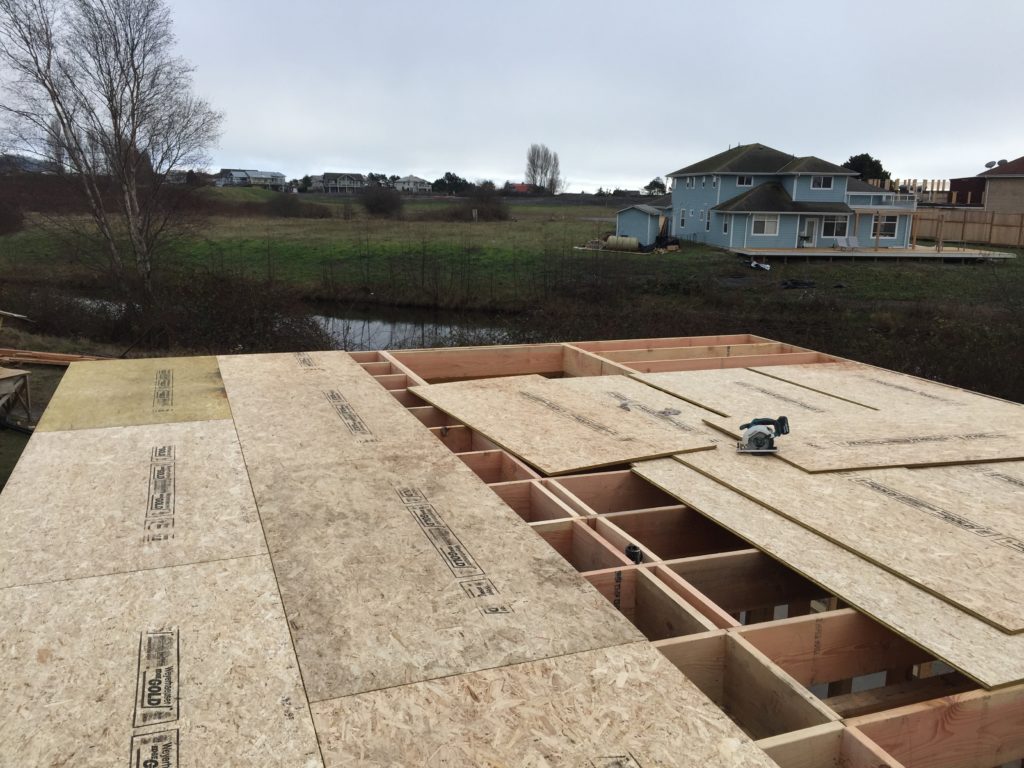 Luckily I thought ahead a little bit and before I got to the last panel I cut out a hole for the stairway opening.  Otherwise I wouldn’t have been able to get back down!  The opening will eventually be much larger but for safety reasons I left it just big enough to allow for comfortable access.  I marked a warning on the areas that will eventually be cut out because there aren’t any joists underneath.  The OSB floorboards are strong but without a joist underneath they could easily break. 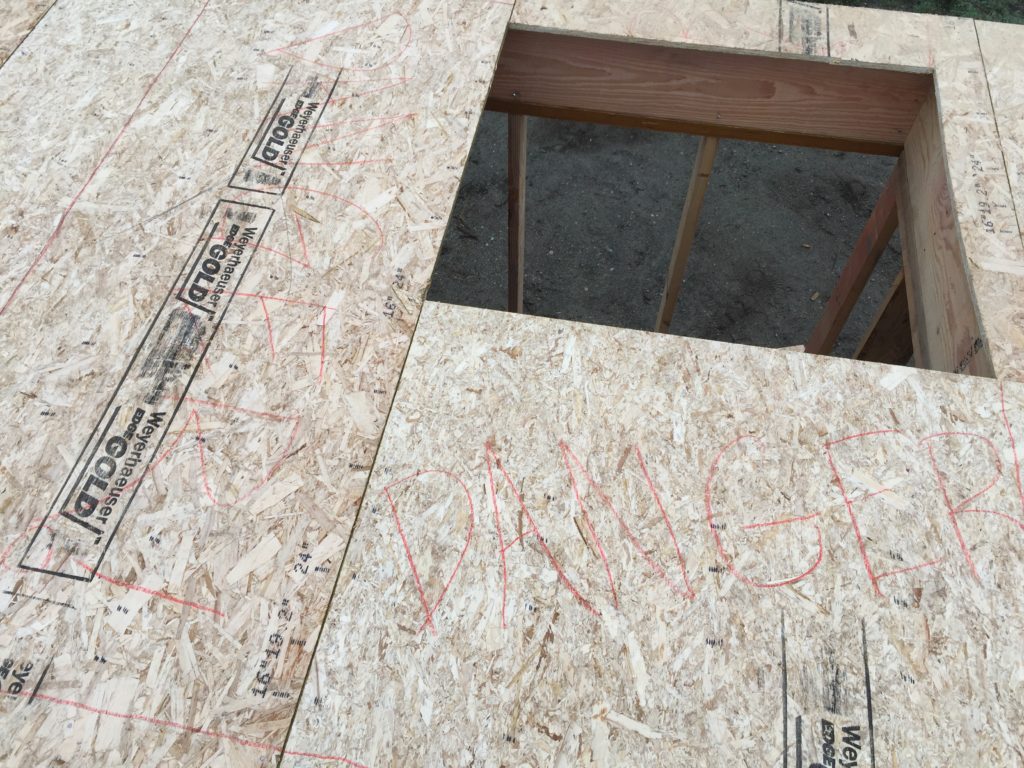 The last step was to run a circular saw all the way around the perimeter to remove any protrusions.  Because of the small gap between each board there was about a 1/4 inch left around the edges.  That and the stairway opening was the only waste I had.  This is very rare in today’s average construction job as the house plans usually call for a bunch of details and angles in the floor.  Contractors cut panels in all sorts of ways as needed and then discard what they don’t use, which can be a substantial amount.  This is one of the benefits of designing a house yourself.  I specifically designed the house with dimensions divisible by 4 feet for this very reason.