Step 7a – Pull Stakes and Forms, Insulate, and Reinspect 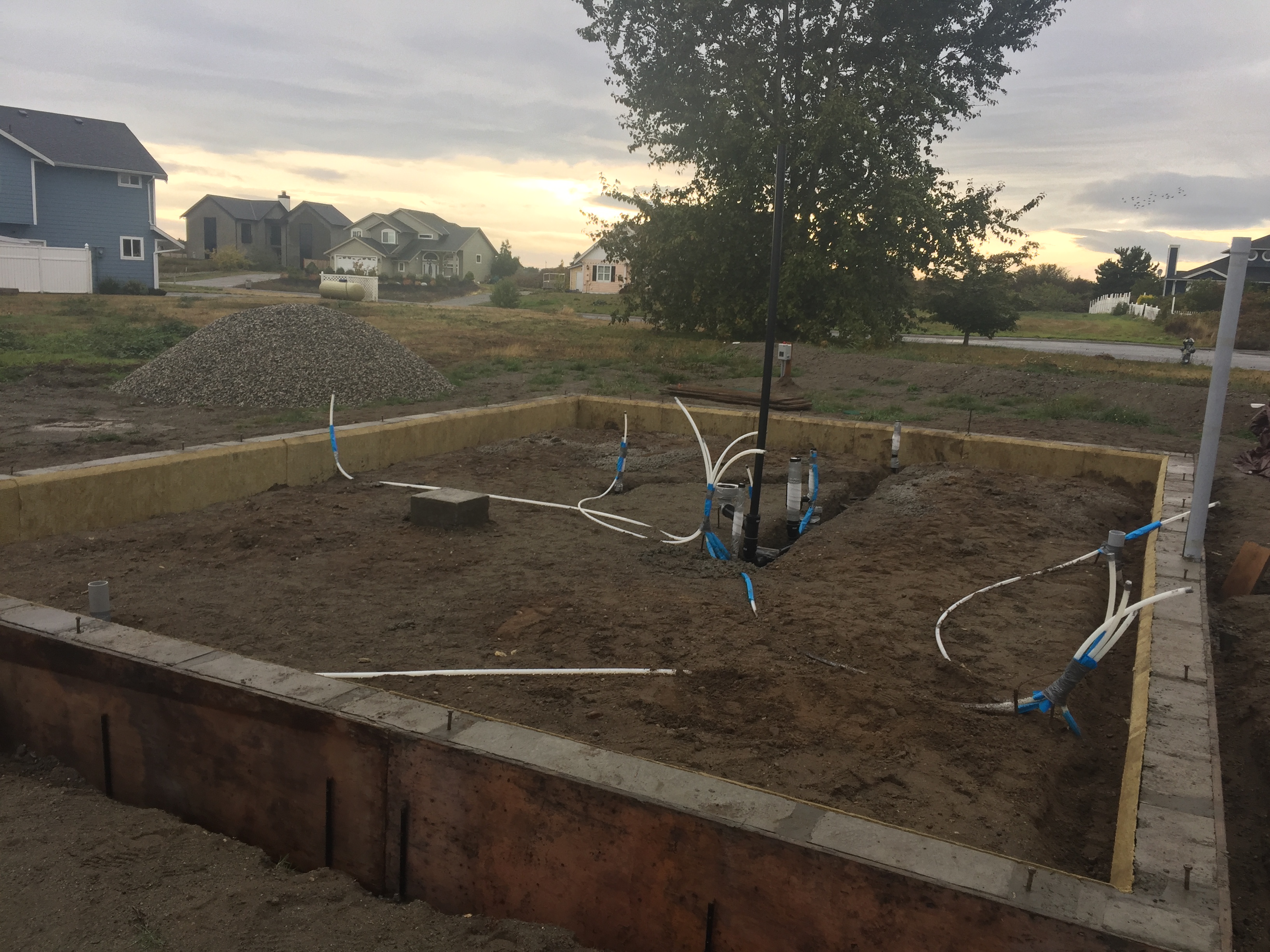 After a couple weeks of frustration, I was rewarded with my second passing inspection today, giving me a green light to pour the concrete slab that will complete the foundation.  I do have a few more steps to take before then, which I will document in the next post, but the inspector is allowing me to just take a picture after the gravel is filled in so he doesn’t have to come back.  Weather is threatening not to cooperate but with a little luck I will have the slab poured before the end of the week.  It is hard to believe that when I get my next inspection, the house will be completely framed! 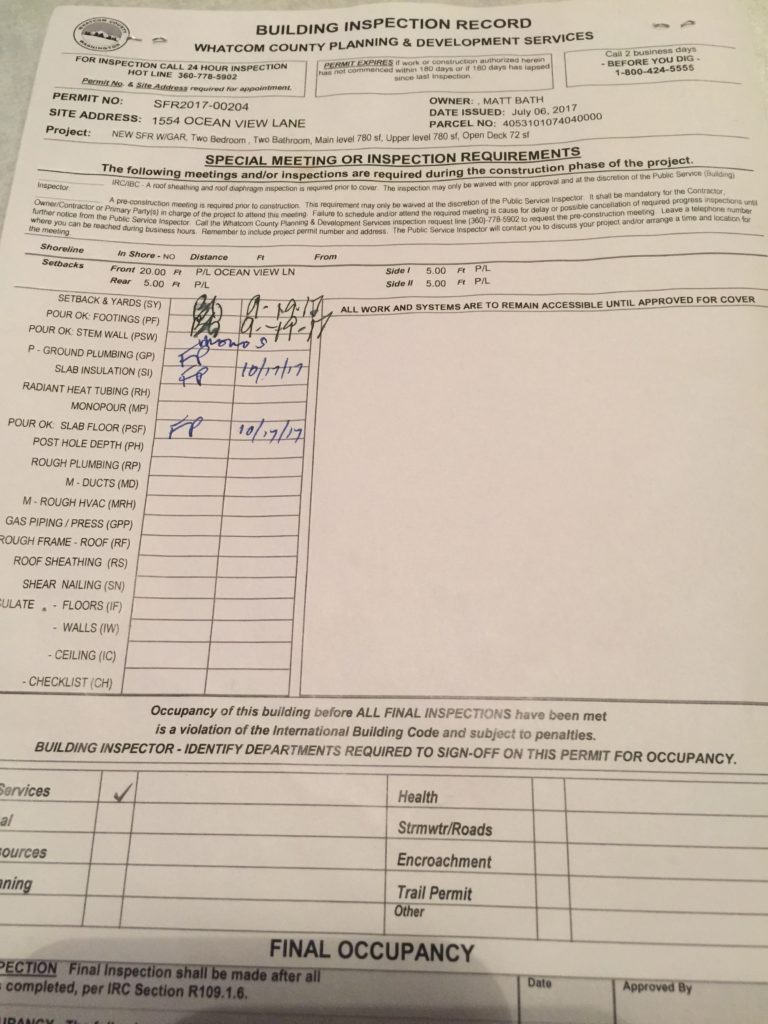 You can see to the left how the permit is kind of like a checklist that the inspector signs off as you move through the building process.  The two blank spots are not applicable to my build and I will actually be skipping over the rough plumbing, duct, and HVAC so the next inspection will be the ‘rough frame-roof’.  After that it will be nice and dry inside and I can work on finishing the plumbing & HVAC.

The frustrations I experienced over the last two weeks resulted from the same mistake that caused the two mishaps with the first concrete pour: underestimating the fantastic power of concrete.  I should have removed the stakes and forms as soon as 24 hours had passed from pouring the footings, but I was nervous and decided to wait an extra day.  When I finally got the nerve to pull the stakes they didn’t budge a millimeter.  I had purchased a fancy stake puller called a JackJaw that my mentor had used to remove his stakes,  but I had decided to go for the $225 unit instead of the $450 one.  The result was the rapid destruction of the tool as you can see below.

Thankfully, JackJaw has outstanding customer service and they offered to accept the unit back as a full price credit towards the more expensive one.  After a week of waiting, it finally arrived and though it was many times more powerful, it was still a battle to get the stakes out as they had now been setting in the concrete for over a week.  Using the customer service associate’s advice, I used a sledge to pound each stake in a few inches and then used the JackJaw to pull it up until it wouldn’t go out anymore, and then repeat the process.  It was an agonizingly slow process, and I still have 4 stakes in the ground as I’m typing this, but that’s about 92 stakes less than I had in the ground a week ago. 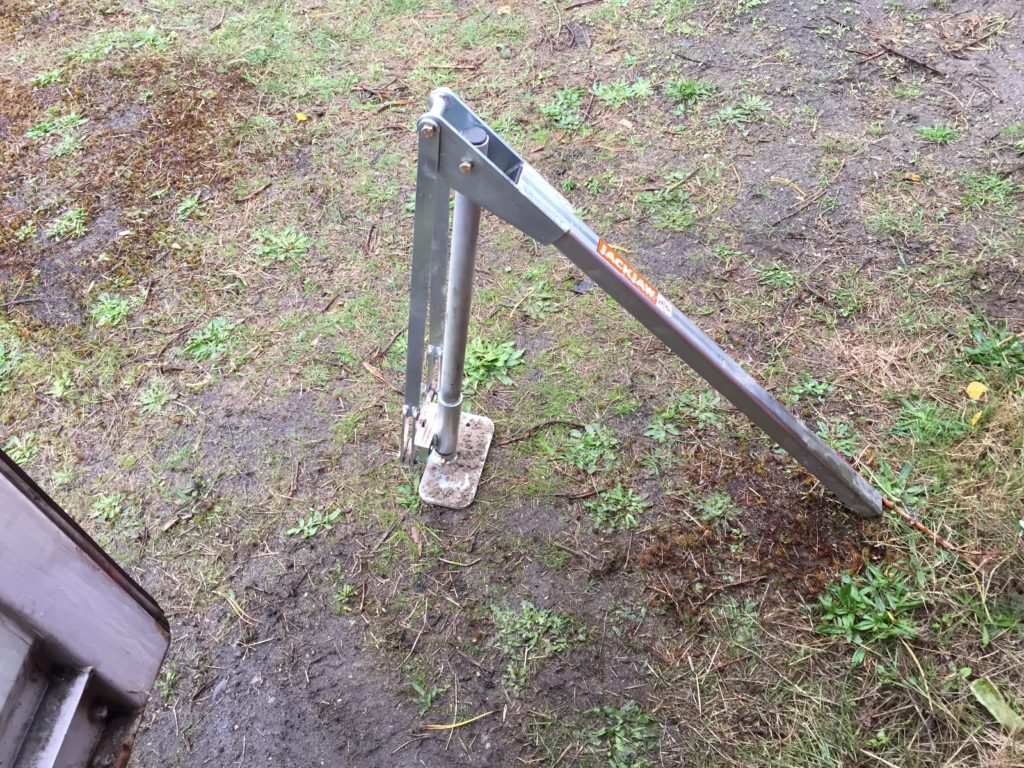 With the stakes out, you might think it would be quite easy to pull off the form boards.  The smooth plywood forms were still greasy from the last time they were used so they didn’t adhere to the concrete, and all the screws and stakes holding them together had been removed.  Unfortunately, because of the way the concrete had curled up and around the bottom of the form as I described in my previous post, removing them was just as excruciatingly time-consuming as pulling out the stakes.  Like running a marathon, it didn’t seem like a lot of fun while I was in the middle of it, but looking back on it the experience was much more rewarding this way and I surely have some additional muscle tone to show for it.

With the forms removed, I was able to apply the Roxul to the interior vertical face of the footing as you can see in the picture that started this post.  Many people find it puzzling that there is a layer of foam sandwiched inside two pours of concrete, but the layer of insulation will serve two important purposes.  It will protect the slab from frost heave during the winter, and work in unison with the walls and roof to reduce the heating and cooling load required to maintain a comfortable temperature in the house all year long.  Cold-weather climate builders have used foam called EPS (expanded polystyrene) that is commonly found in packaging for a new television or computer underneath or surrounding slabs for many years. 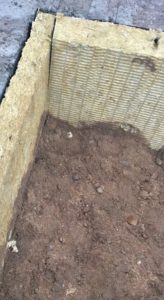 Not only is the manufacturing of the foam harmful to the environment, but the insulating power (r-value) slowly degrades over time.  With Roxul, a brand of rockwool, you don’t have either of these downsides.  It really is an incredible product as you can soak it down with a hose all you want, peel back the outer layer, and the inside will be bone dry.  As you can see to the left, I cut a 45 degree slope on the top of the Roxul.  This will allow for maximum insulation while also giving the slab a firm connection to the footing.

The last step was simple.  I just capped off the entire DWV system (Drain, Waste, Vent) and filled it with water.  As you can see, I added a 10′ section of ABS to one of the vents so I could show the required “10 foot head of pressure” for the inspector.  The force of gravity on the column of water held in that pipe applies a force to the entire system that the building code has approved to show that there are no leaks in the system.  It hasn’t happened a lot, but this was one of those rare times when I didn’t have to spend any extra time fixing a mistake I had made.  As you can see below, an empty and uncapped, upside down water bottle shows the water level holding steady, showing that there are no leaks.

1 Comment on “Step 7a – Pull Stakes and Forms, Insulate, and Reinspect”