mbath Posted on August 23, 2018 Posted in Building Your Own Home, Do Your Own Carpentry, Framing a House No Comments Tagged with Building Code, Egress, Flashing, Header, Sheathing, Sill Pan, Stud, Tyvek

Door installation began by first checking that the rough opening was the correct size.  I caught a mistake that I had made here, as my rough opening was unfortunately one inch short.  I had to either install a smaller door or make the rough opening larger.  Seeing as how this door was the only 36″ door in the house, I was forced to make it bigger to satisfy the building code for emergency exit.  I lost a days work as I had to cut out the king and jack studs on one side of the opening, remove the header, trim back the sheathing, foam, and Tyvek one inch, build a new header and support that was an inch larger, reattach it to the king stud and jack stud, and then nail it back into place. 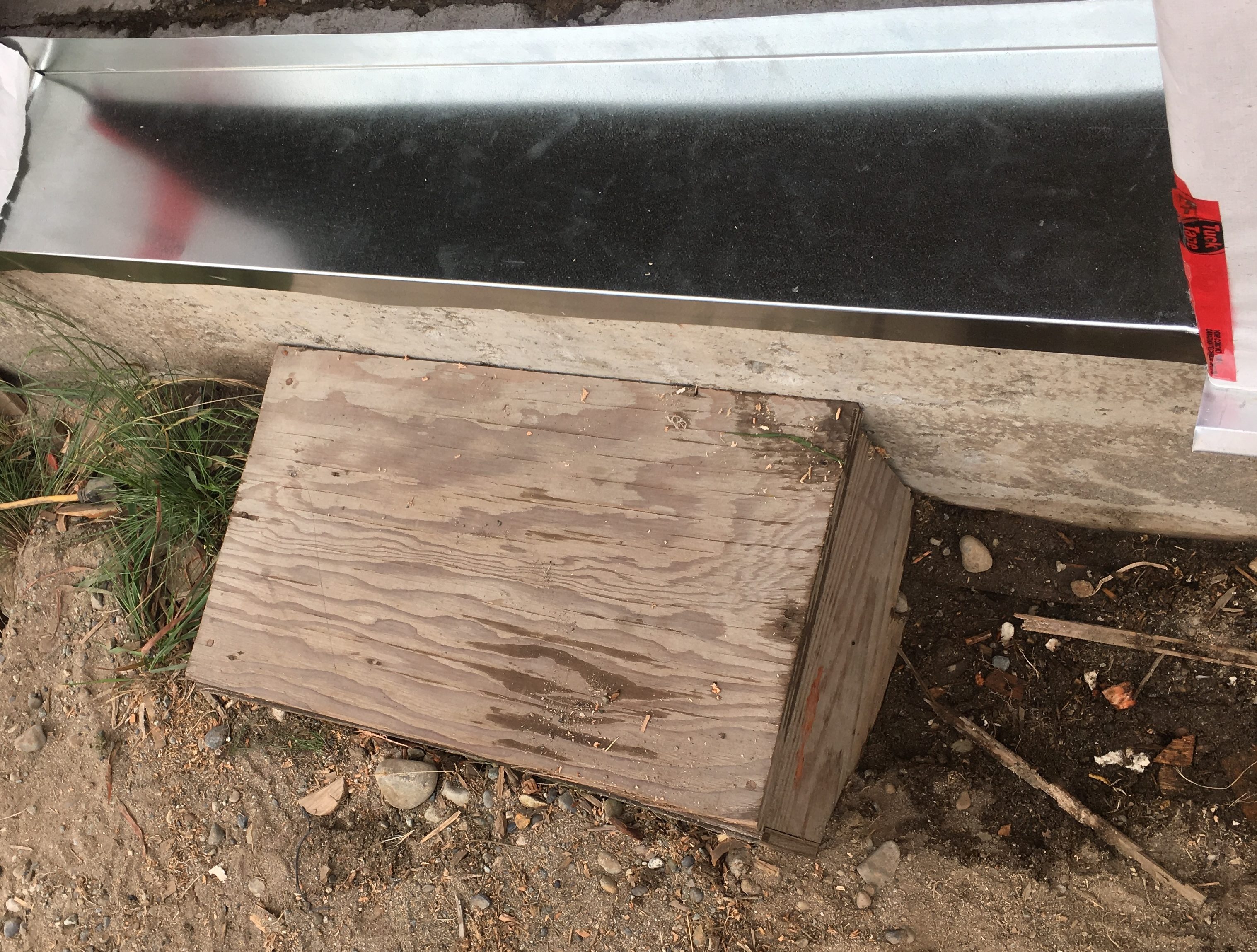 The next step was to clean and dry the concrete at the rough opening, apply a very liberal coating of caulk and press the sill pan into place, ensuring it is slightly sloped to the exterior.  I had these custom made at a metal fabrication shop so they perfectly fit the rough opening for each door, and they will ensure that any water that finds it’s way around the door opening will eventually be brought down to the pan by gravity and then out.  If you look to the very left side of the picture, you can see how I brought the Tyvek over the rim of the sill pan to ensure water won’t find it’s way behind. 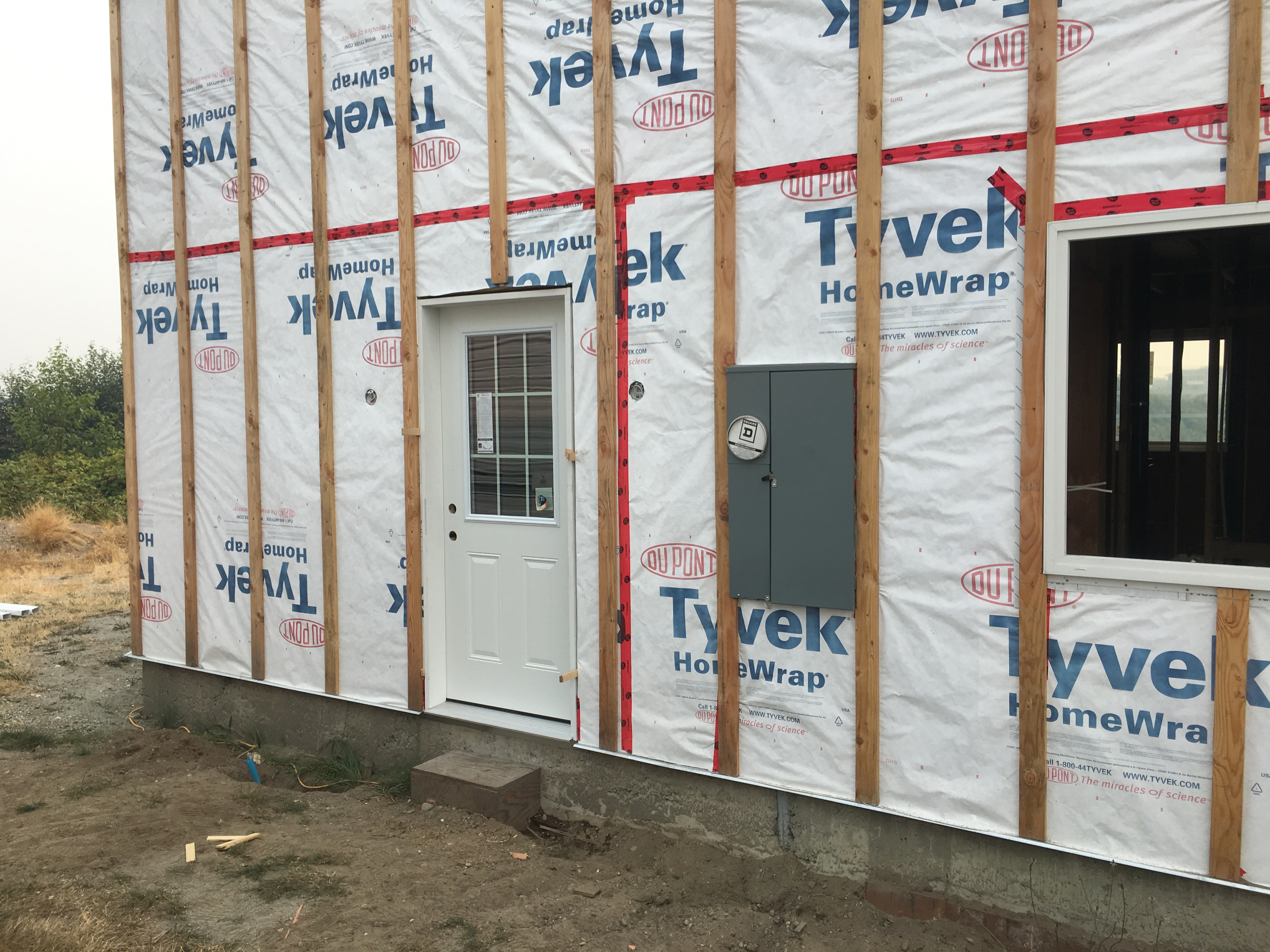 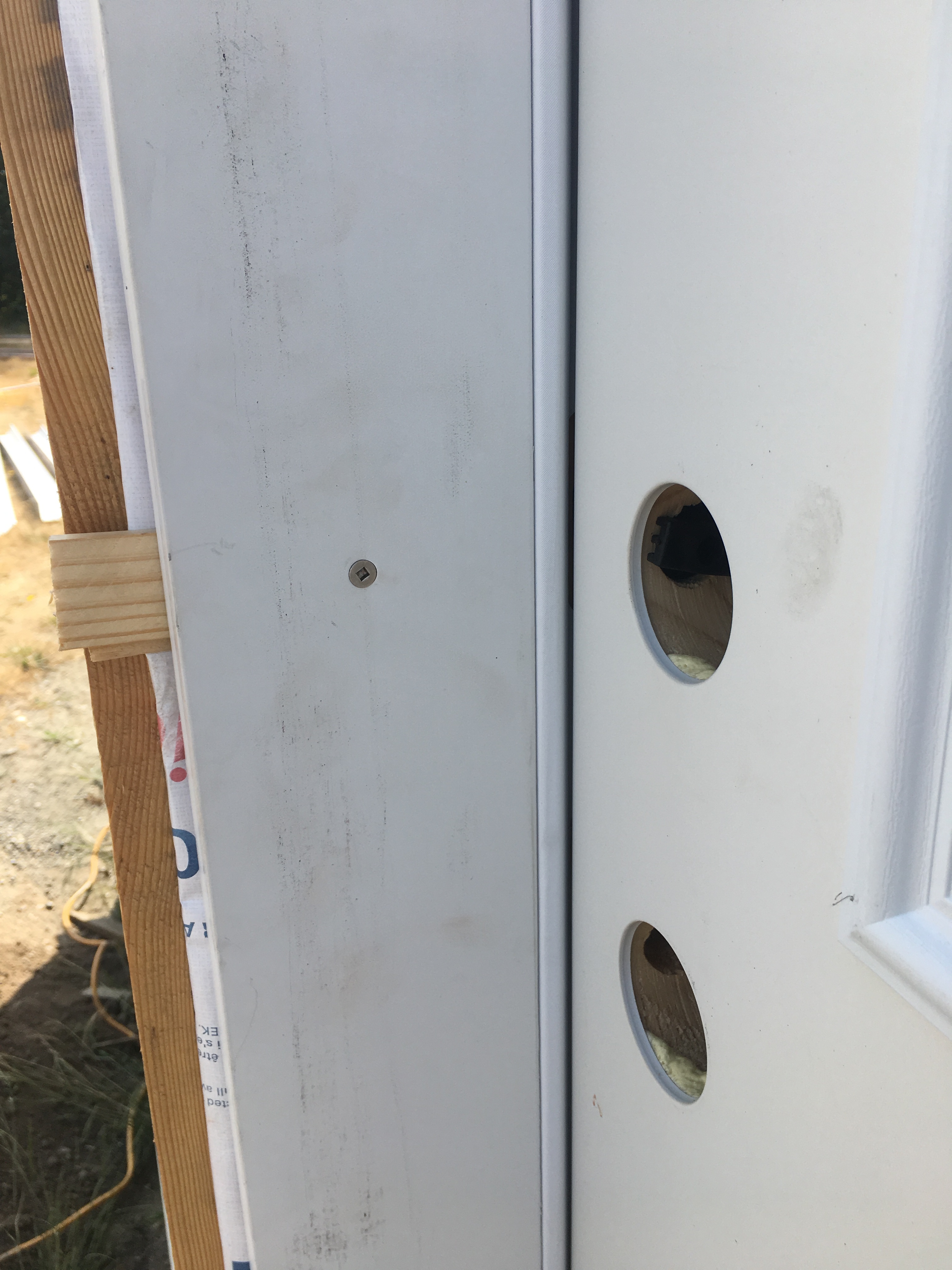 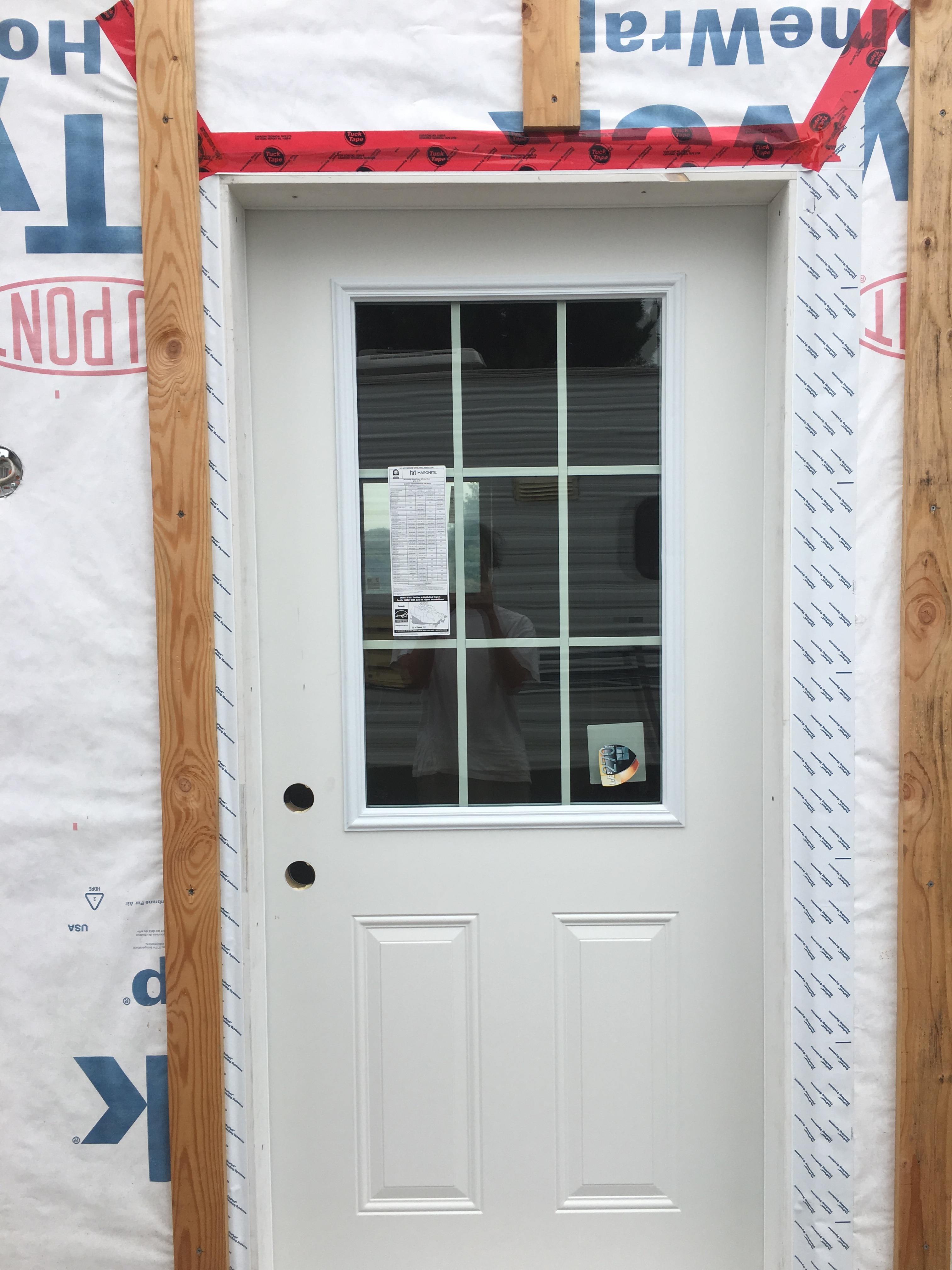 I decided not to install the french doors on the second story yet.  I will wait to install those until I finish building the second floor walk out deck so I don’t have to install them while balancing on a ladder.  With the foam providing support and the Tyvek providing moisture protection, the opening in the sheathing for the french doors is dried in at this point even though the doors aren’t installed.  Where the two overlapping layers of Tyvek met below where the french door opening will be, I attached another piece of custom flashing.  This will ensure that the second story deck is protected from water damage.  At this point the house is officially dried in and I can really start getting going on the inside.  You can see how I beveled the foam to make a neat indentation for the deck ledger to be attached. 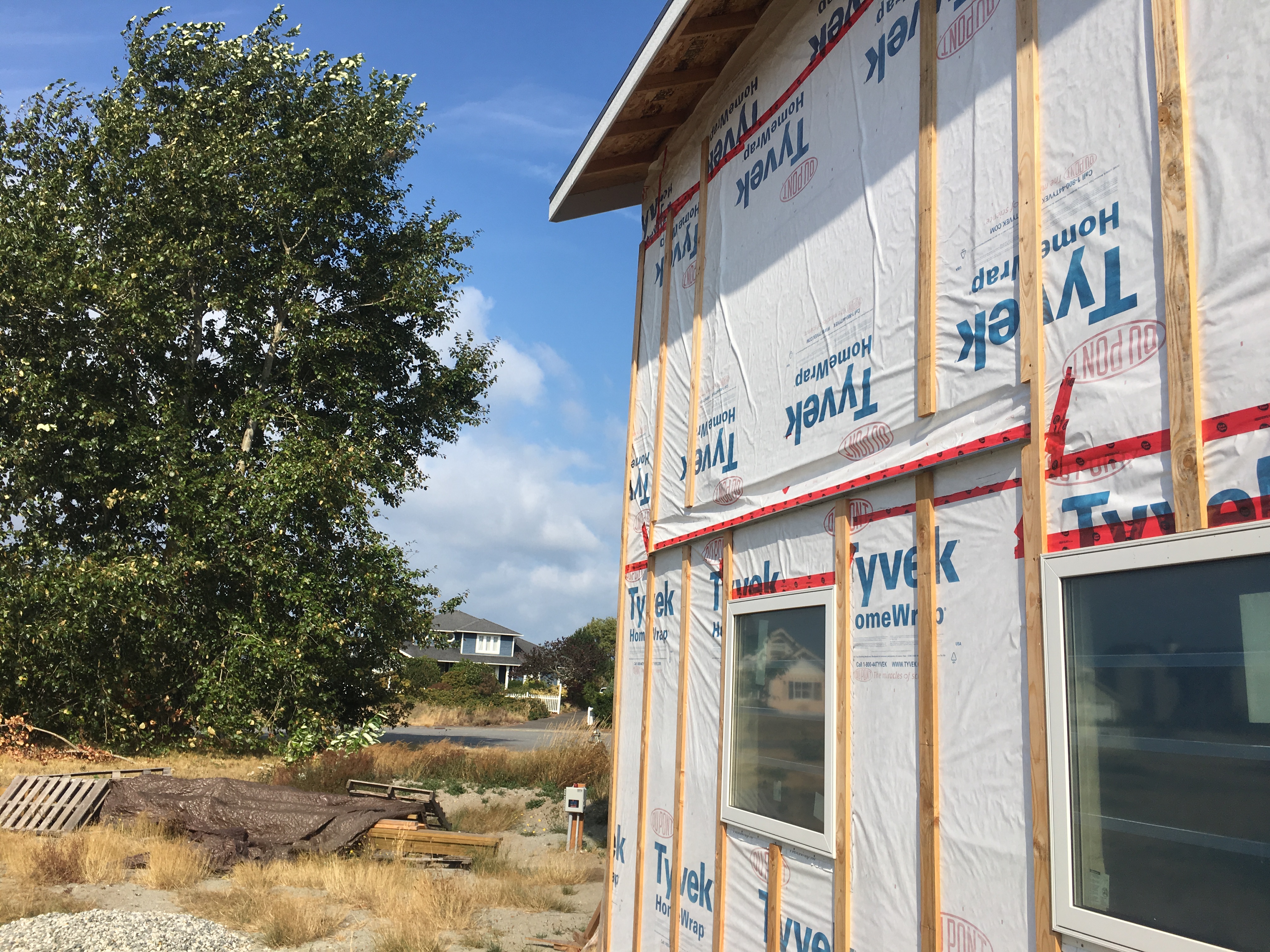