mbath Posted on November 27, 2018 Posted in Building Your Own Home, Do Your Own Carpentry, Framing a House No Comments Tagged with Beam, Deck, Footing, Insulation, Joist, Post, Tributary Area

Since I moved out on my own, I have had the opportunity to live in 7 different houses/apartments.  I would say all of them except the first one (you’ve got to start somewhere, right?) had a really nice feature that I loved.  When you design a house yourself, you get an opportunity to add in all of these features you have experienced in the past and combine them all together into one incredible home.  A second story walk out deck is definitely one of those features that I really enjoyed having in several of my previous dwellings.  Watching the colors change as the sun goes down with a cold beverage in hand is one of my favorite ways to waste time. When I first bought my lot I drove my truck around to different places with a ladder in the bed so I could try to figure out what the sunset view from the deck would be like.  I got a decent idea of what it will be like when I framed the second floor but until the deck is constructed I won’t know for sure so this is an exciting step!  When I initially started designing the house, I planned for the deck to be above one of the rooms on the first floor.  The problem is that every room needs a ceiling, and if you are building a net-zero home you want that ceiling to have 15″ of insulation, and if you are a smart builder you want at least 6 inches of space for air to circulate above the insulation.  I quickly found it to be more trouble than it was worth so I changed my design so there wouldn’t be anything underneath it. 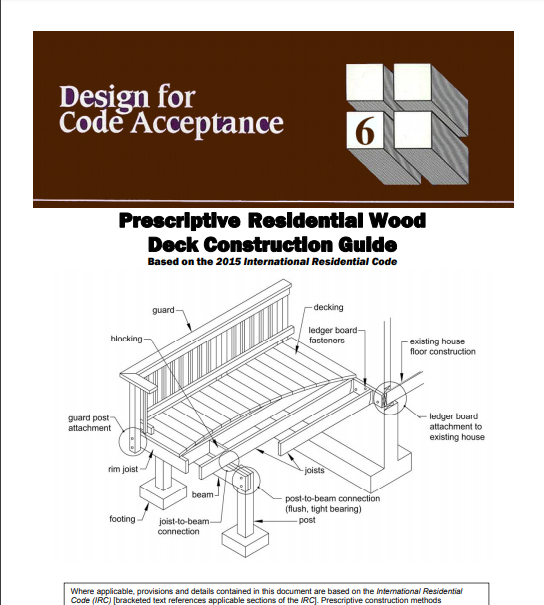 Building codes for decks are spelled out in section 507 of the IRC (International Residential Building Code), but the section isn’t as detailed as other parts of the code.  For more information you can use the AWC (American Wood Council) Deck Guide, which is “based on the 2015 IRC” and pictured above.  With most anything political, companies inevitably pool their money together to influence lawmaking, so the AWC has a pretty substantial influence over what goes into the building code.  Thankfully, the deck manual is free on their website!  Once you know the size of the deck you want to build, you can select the proper joists, beams, posts, and footings to carry the weight of the deck and the people on it safely to the ground.  Any deck that is not attached to the house and over 30 inches off the ground requires the house plans to be stamped by a licensed engineer.  I wanted to do the engineering of the house myself, so I chose to attach my deck to the house.  Decks that are attached to the house must be attached on the longer of the two dimensions of the deck.  For the shorter dimension, the deck code has a table that tells you what size and species of wood you may select.  For my six foot span, I chose 2×6 ‘Douglas Fir, which at 24″ on center spacing and no cantilever is sufficient for spans up to 7’2″.  These joists will be set into hangers on a board called the ledger.  Attachment of the ledger to the house is the most common point of failure for decks so the code contains detailed diagrams and very specific language when it comes to what size bolts and the location of the bolts to use to attach it to the house. 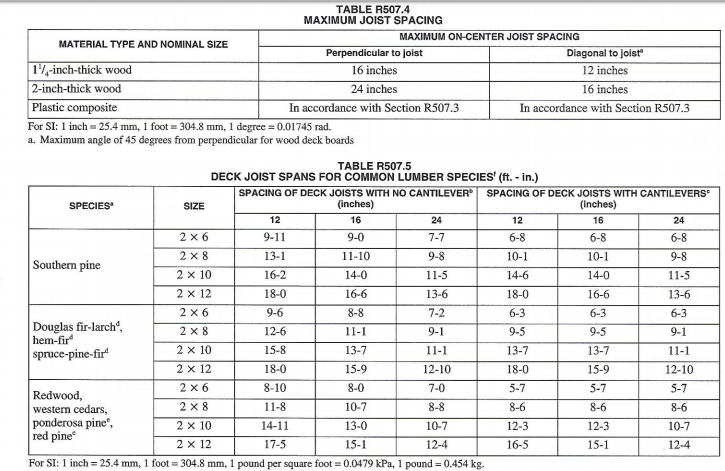 The next step is to calculate the beam size for the deck.  I will just be using one beam to support the opposite end of the deck as the one that is supported by the house, but I could have also decided to use two, with a second being placed in the middle of the joist span.  This can start adding up however, as every beam requires more posts and more footings.  I decided to cantilever the ends of the deck so the beam would have an 8 foot span between the posts, and this distance was satisfied by using three 2×8 Douglas Fir boards nailed together to create one massive beam. 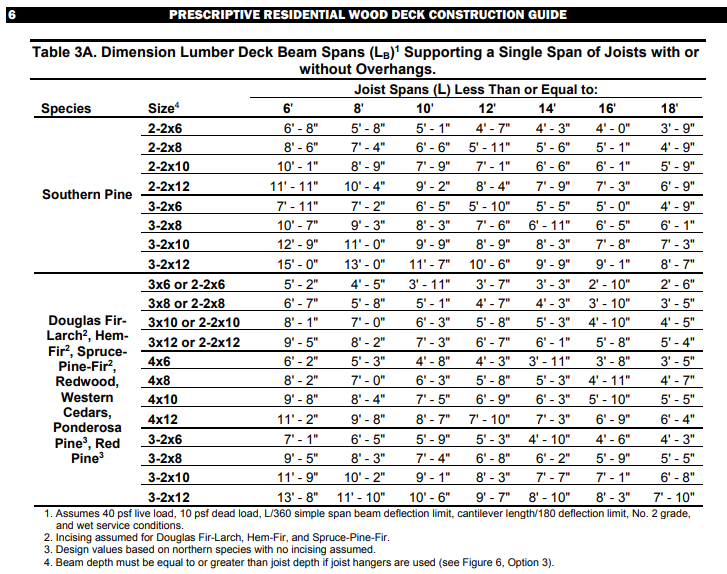 The code does allow the use of 4×4 posts, but I decided to upgrade to 6×6 in case I want to enlarge the deck in the future.  These posts attach to the beam on top and to a footing on bottom.  The footing is the one thing that is not clearly spelled out in the IRC.  I used the AWC deck guide, which has a special section to calculate the footing size based on tributary area. 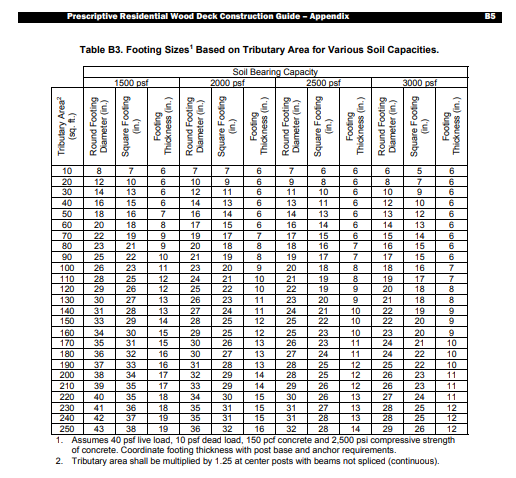