The hot water supplies are installed just like the cold ones, except that it’s a good idea to insulate them to ensure that the hot water stays nice and hot as it travels from the tank to the fixture.  There are a few less hot water lines than cold as the toilets, pot filler, and drinking water tap don’t need a hot line.  On the other hand, the dishwasher and shower steamer require only a hot water line.  All the other fixtures get one of each, so  I needed a total of 9 lines. 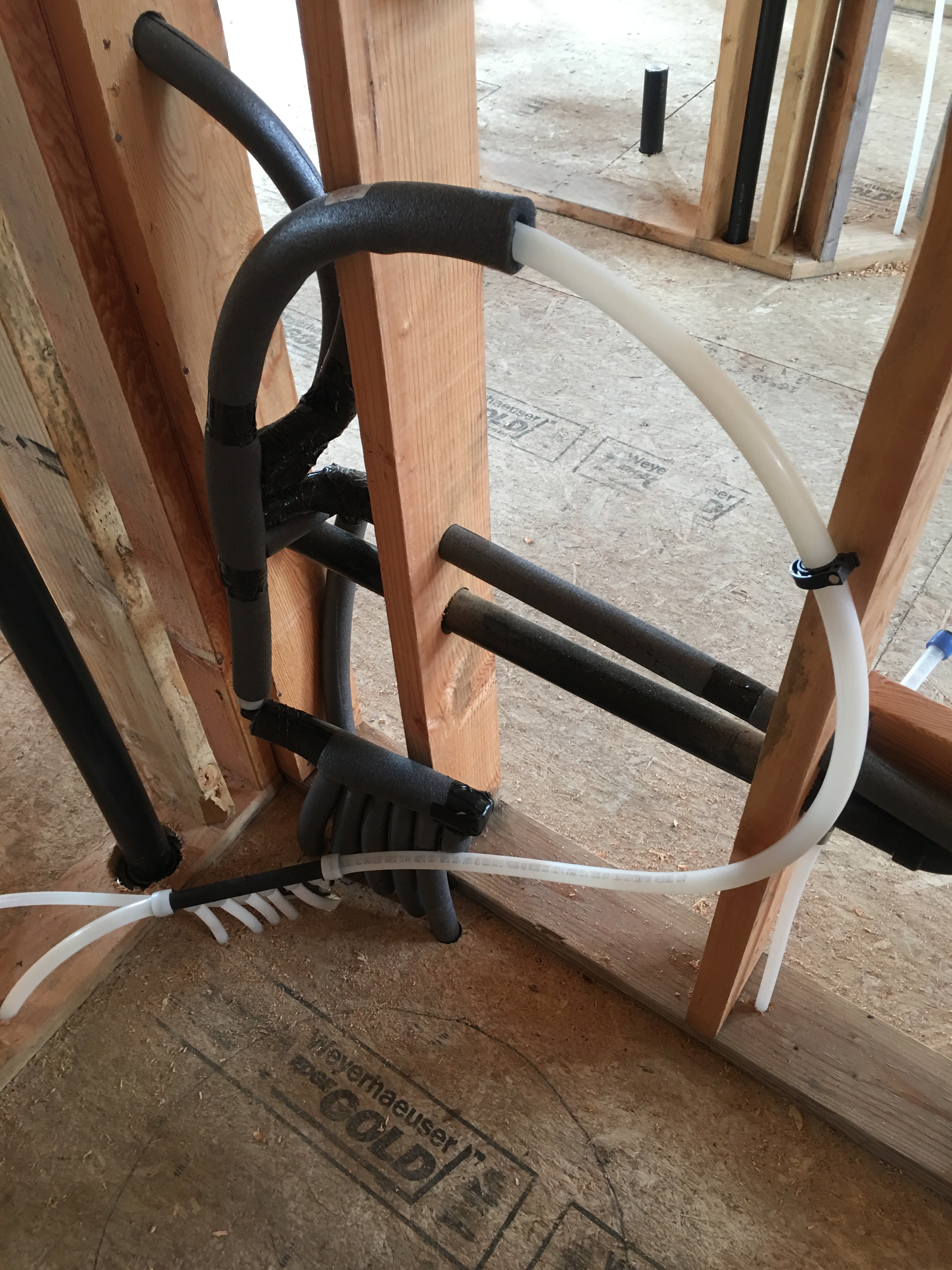 The water heater doesn’t need to be attached for the plumbing inspection, so I just created a little loop as you can see above where the cold line will run into the tank and the hot line will come out.  When I’m ready to install the tank I will cut the line and attach the two cut lines to the tank.  The first hot water manifold has a total of four runs and supplies mostly the upstairs fixtures.  The top line runs up to the attic where the steamer will go.  The second and third run to the master bathroom sinks.  The fourth goes to the downstairs bathroom sink. 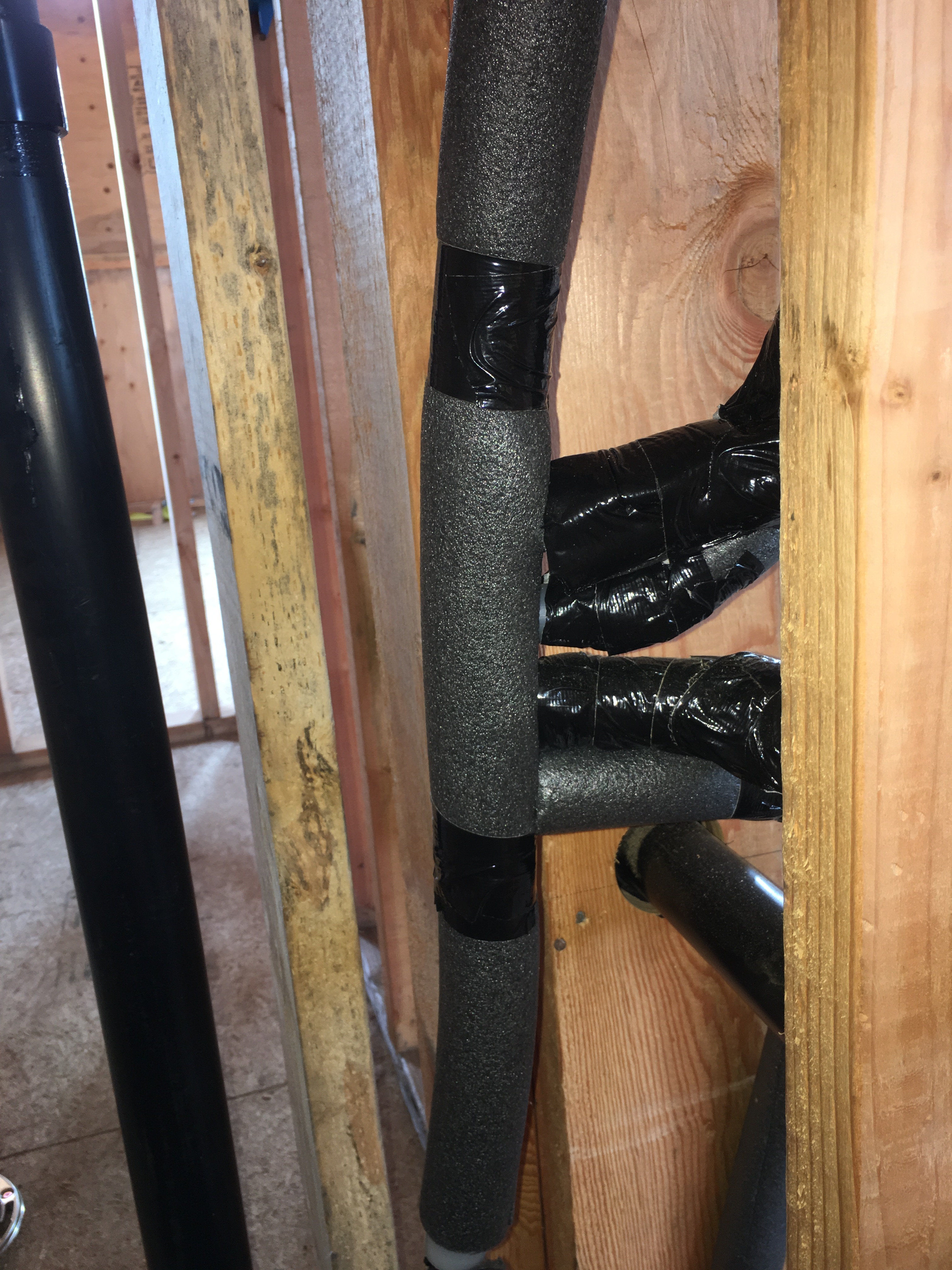 The hot line continues to a second manifold that I attached horizontally since all the lines on it need to run between the floor joists.  The first and second go to the master shower valves, the third runs to the tub, the fourth to the kitchen sink where it will tee off to hit the dishwasher as well, the fifth goes to the washing machine, and the last line I capped and will be able to use it in the future if I add another fixture somewhere. 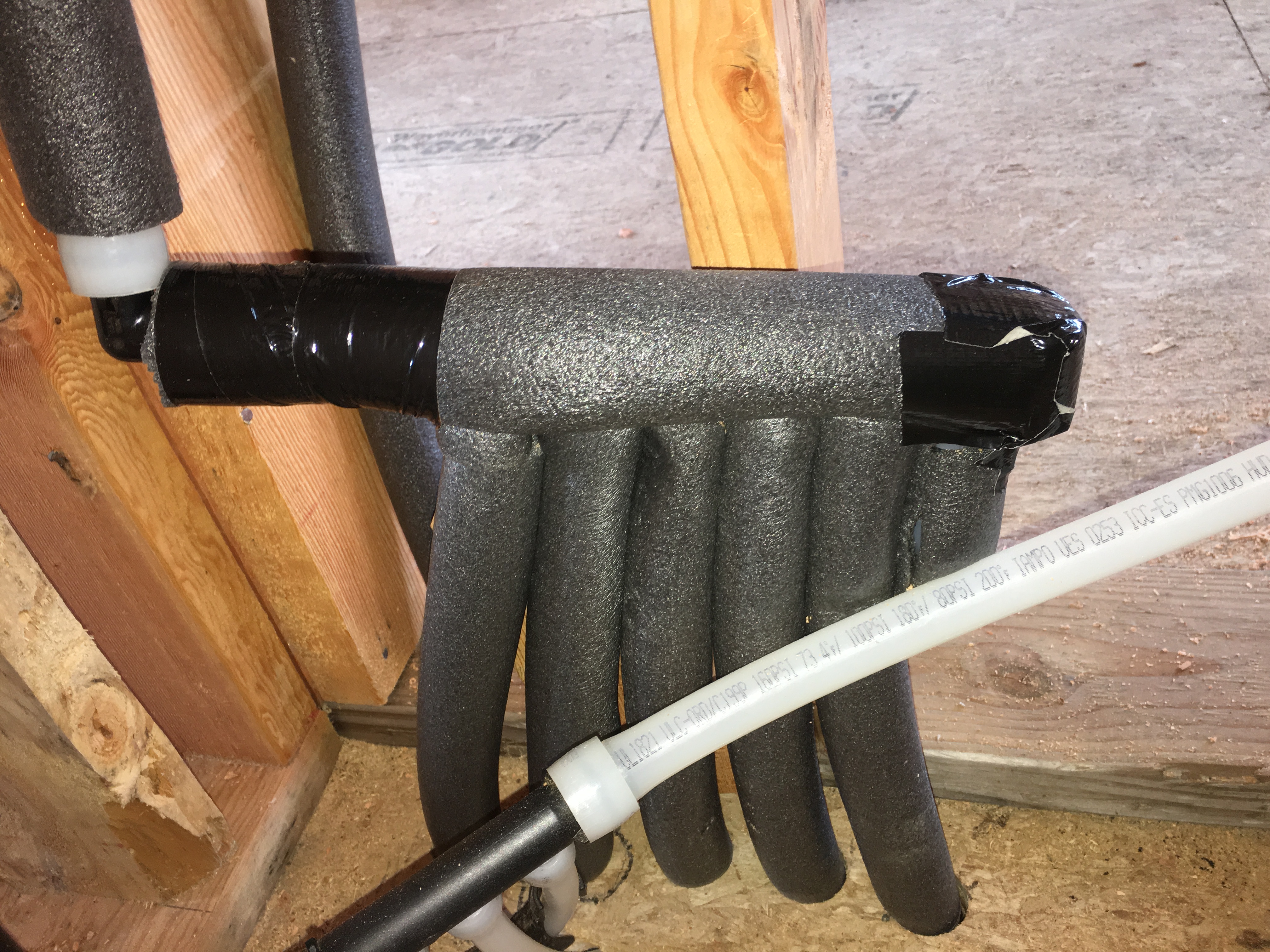 My county building code doesn’t require the tub to be installed in order to pass the rough plumbing inspection but many jurisdictions do, and it is a good practice since the more plumbing you can install before finish materials, the easier it will be to fix a leak.  I decided I might as well put it in sooner rather than later.  The tub I chose for the house comes with a styrofoam base so there was no need to pour mortar.  I did put some construction adhesive down under the styrofoam just to make sure it really bonded and filled any small irregularities there might have been in the concrete.  It is very important to ensure the tub is level so that water will always flow towards the drain.  I followed the instructions and attached a ledger to the wall to support the tub. 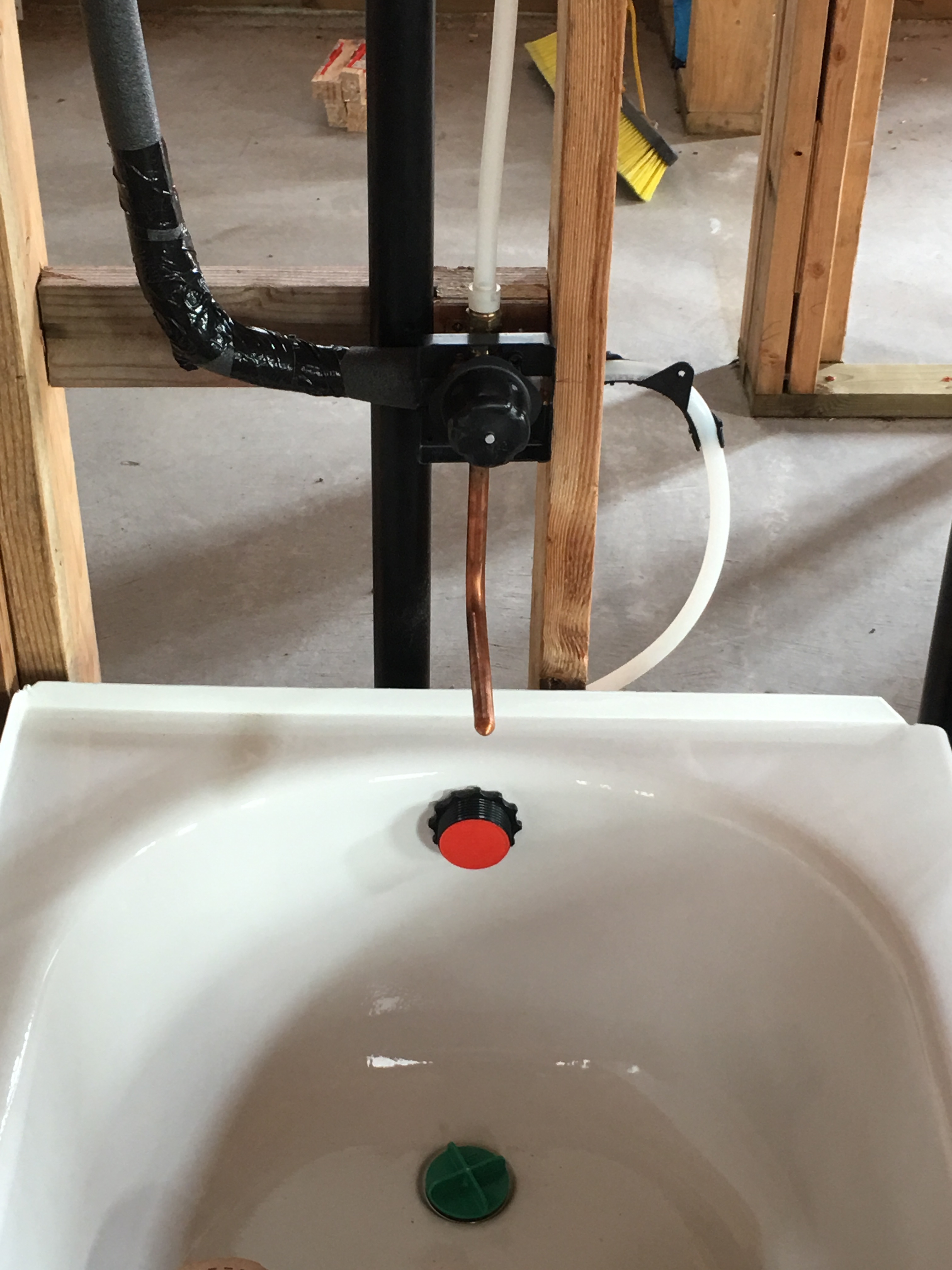 Here you can see how I have attached the ABS plumbing for the tub waste and overflow.  The kit I bought comes with test caps to use to pressure test the plumbing fittings, which I will explain in the next blog entry.  After drywall has been installed, the test caps are removed and replaced with the permanent tub drain and overflow cover, which were also included in the kit. 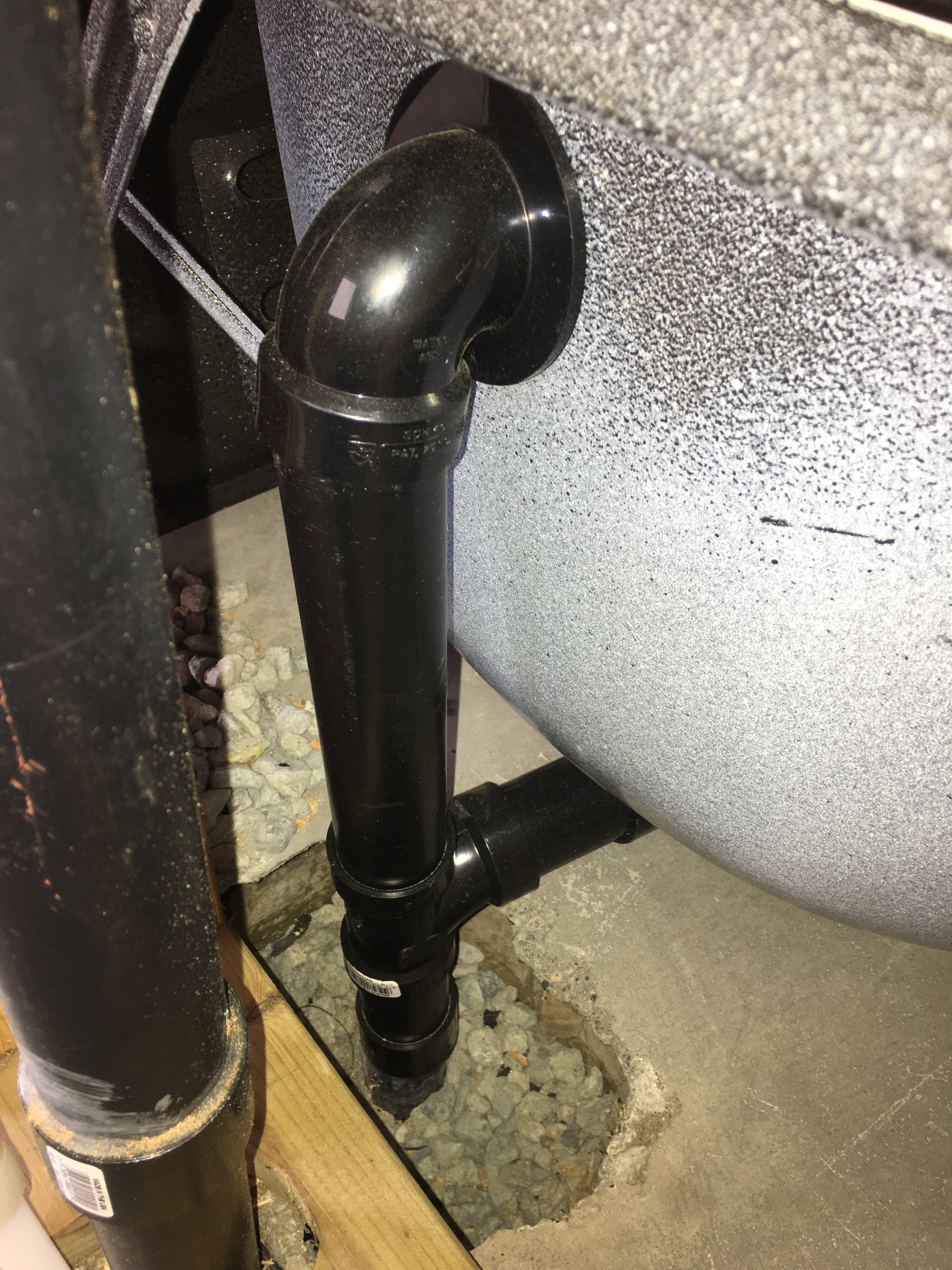 It’s important to use teflon tape whenever connecting metal pipe fittings, as I did when installing the tub and shower connections.  The tape lubricates the metal, allowing it to form a very tight seal, and also prevents the fittings from melding together over time so if they ever need to be disconnected from each other that will be possible.  I used the tape for both the connection to the shower head and also the tub spout.

All that is left to do now is plumb in the yard hydrants, main entrance shutoff and manifold, and pressure test!  I am very close to finishing up with all of the rough plumbing of the house.  Here are some final pics for you to enjoy.