mbath Posted on November 27, 2018 Posted in Building Your Own Home, Do Your Own Electrical Work, Wiring Your Own Home No Comments Tagged with AFCI, Circuit Breaker, GFCI, Main Panel, NEC

For some reason, I experience an immense pleasure stripping wires and making them look good, so making up the main panel was a very enjoyable task.  I spent a great deal of time ensuring that it looked as clean as I could make it.  At the end of the day, it really doesn’t matter as the amount of people that will ever remove the “dead front” and look inside the panel are limited to 10-20 people over the lifetime of the house, but building a house is much more rewarding if you take pride in the small things. 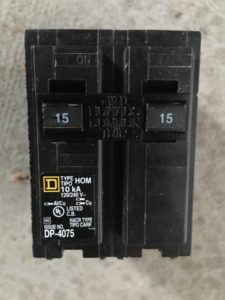 As I showed earlier, it is important to know the proper size circuit breaker for each individual circuit.  Each circuit is built to power a “load”, whether it be a water heater or a refrigerator or a light.  The proper size circuit breaker will know when the current increases above the planned maximum current for the load you have planned on the circuit and cut power to the circuit.  This is an important part of the grounding system of the house, which I also explained previously.

The NEC requires that any receptacles in garages, kitchens, bathrooms, outdoors, and laundry areas are protected by a special type of circuit breaker called a ground fault circuit interrupter, or GFCI.  This type of breaker will not only trip when the current rises above the maximum for the load, but will also measure the current as it returns back to the main panel after powering the load to make sure that no current has 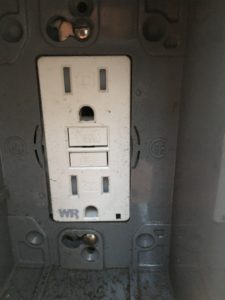 “leaked” out of the system.  For example, let’s say someone is in the kitchen and doesn’t notice that the “hot” wire on the toaster cord has a puncture in it and is lying in a small puddle of water.  When someone touches the water, they will be electrocuted, but the current in the circuit won’t change significantly enough to trip the regular circuit breaker.  The current will stay roughly the same in the circuit because it is still powering a “load”.  Unfortunately, that load would be a human being electrocuted.  The GFCI will trip in this case, however, because it senses that the power it is sending to the “hot” conductor is not returning to the main panel on the white “neutral” conductor.  It knows that the current is leaking and will immediately shut off, hopefully so quickly that the person is not gravely injured.  Alternatively, instead of using a GFCI breaker, you can use a regular circuit breaker with a GFCI receptacle.  This is what I will be doing as it is

much more cost effective, yet just as safe. As you can see to the left, the GFCI breaker has a reset button so if it trips you can reset it without going to the main panel. There is also a button to test to see if it is working.  You can connect multiple regular outlets downstream of a GFCI outlet and they will all have GFCI protection if wired correctly.

The last type of breaker is an arc fault circuit interrupter, or AFCI, and is required on almost all circuits that power multiple devices inside the house other than bathrooms.  If you have ever seen a spark plug work, you have seen an arc.  Electricity can be motivated to “arc” through the air, visible as a spark.  Sometimes wires are just a little loose, so electricity can “arc” between them.  The load is still powered, so a regular breaker doesn’t detect it.  The loss of power is so low that the GFCI breaker doesn’t detect it, and yet the spark is powerful enough to start a fire in the same way that the spark plugs in your car ignite the gasoline in your engine.  The AFCI has the ability to detect these “arcs”, and will trip, alerting the homeowner to a potential problem in the wiring.  I used a special AFCI breaker that is extra long and designed to connect not only to the main “hot” bus but also the neutral bus bar.  Again, the breakers work by monitoring the power as it returns to the panel and comparing it to the power that is leaving the panel so it must be connected to both the “hot” and neutral conductors.  However, a circuit must be continuous in order to function so the neutral conductor must eventually be connected back to the panel.  This breaker accomplishes both tasks so the power flows from the power company to the main panel, to the breaker, through the circuit, back to the breaker, back to the main panel, and finally returns to the power company.  (Again, this is a vast simplification and not an accurate description of the way alternating current from the power company functions, but it makes it easier to think of it that way) 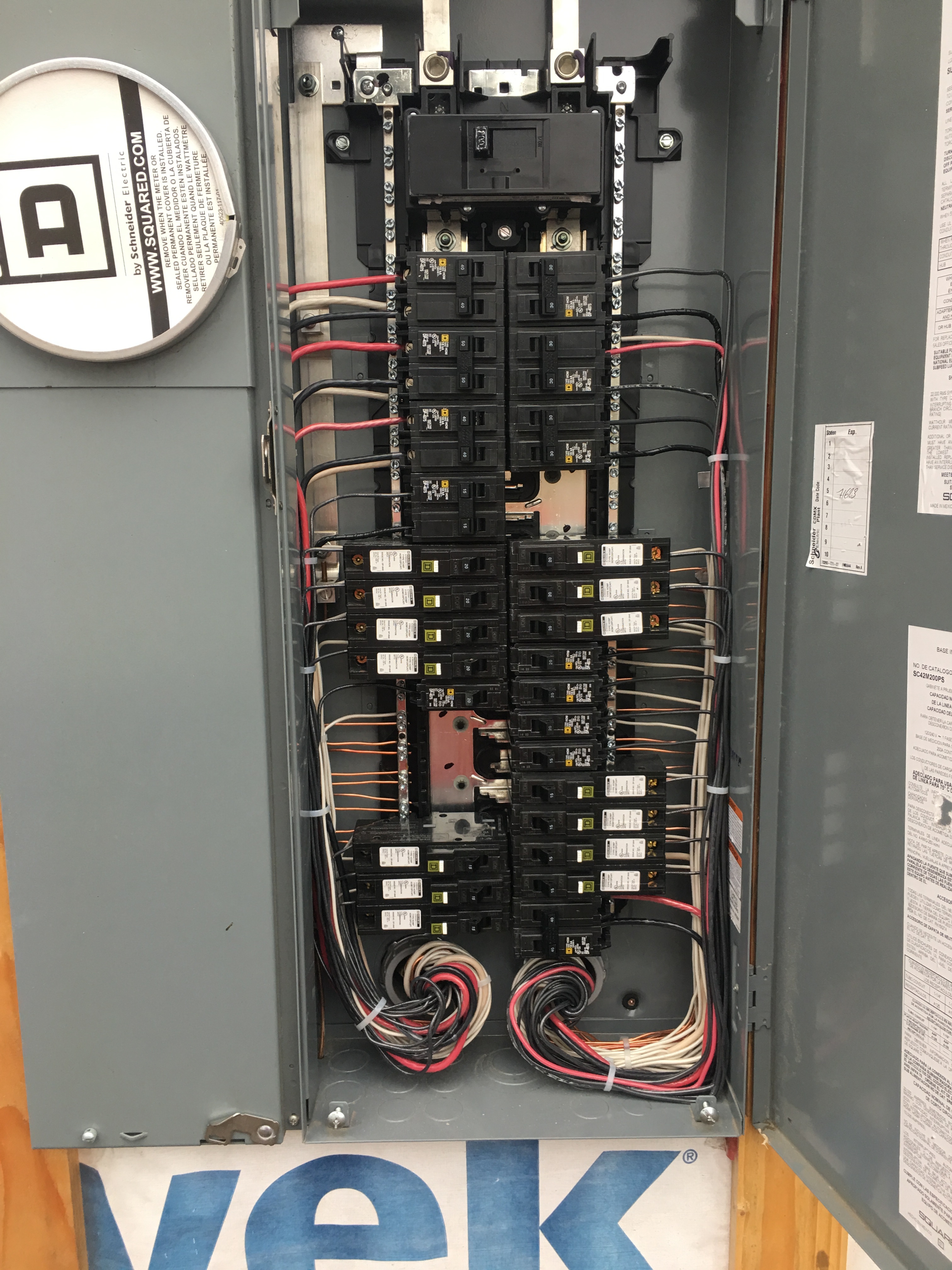 Once the proper breakers are installed into the panel, it is just a simple process of stripping the wires and connecting them.  The ground wires always go in any location on the neutral bar unless you are wiring a subpanel, in which case there must be a separate bar for the grounds that connects to a single ground wire that is wired directly to the main panel neutral bus bar.  The white conductors are also connected to the neutral bar, unless they will be connected to a GFCI or AFCI breaker (remember, these breakers monitor the current returning to the panel, and that comes in on the white conductors, these breakers are in turn connected to the neutral bar).  The exception is when you have 240 volt only circuits, in which case both the black and white conductors act as “hots” and must be connected to the breaker.  In this case, the white wire must be taped black to alert anyone operating on the panel that it is being used as a “hot” wire.  You can see two of these on the right side of the panel (the 5th and 7th wires) in the pic above. The black and red conductors are always connected to the breakers. 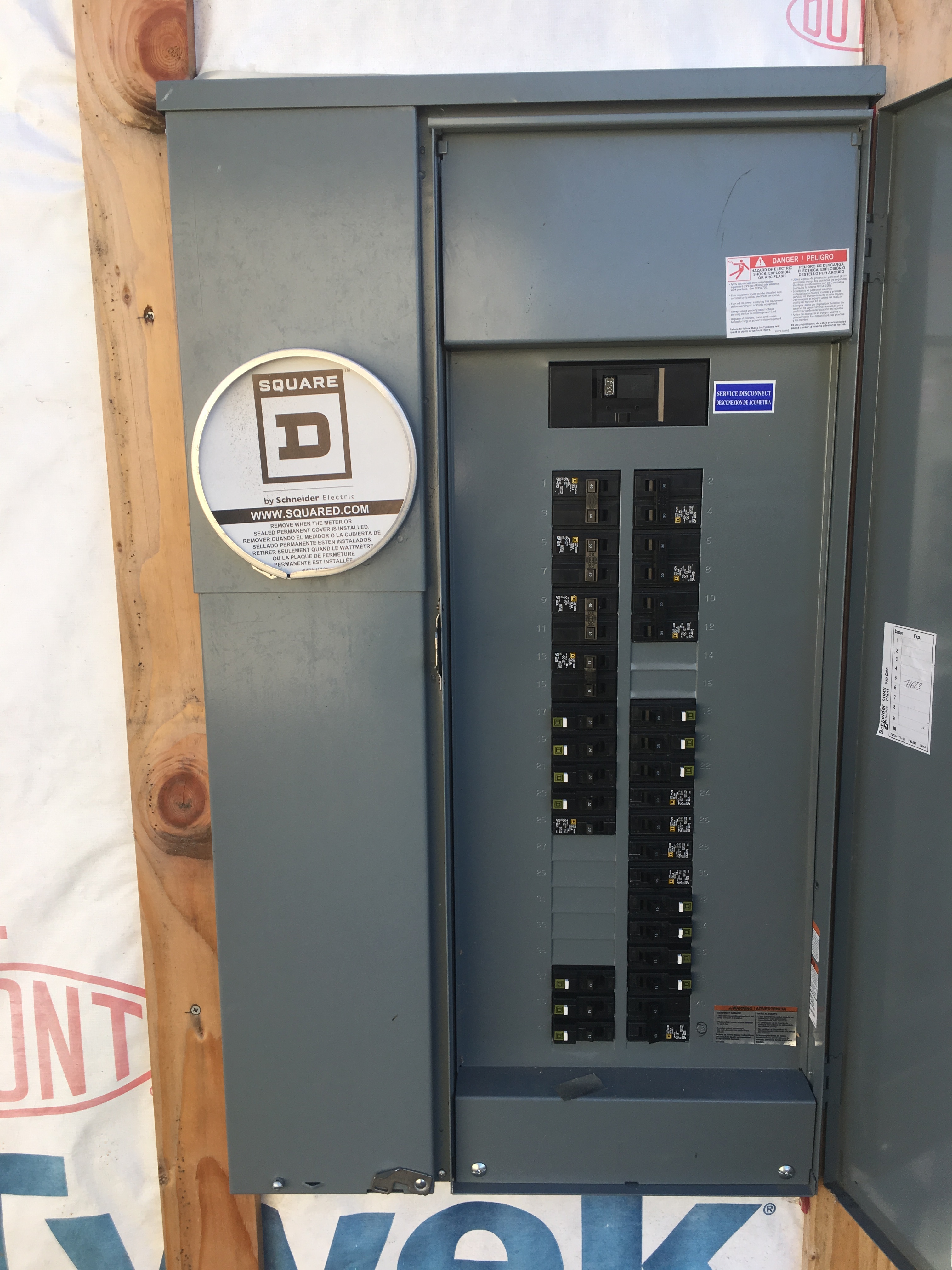 You can see that I have a few spots left for possible future circuits.  I also ran a conduit into the box so I could fish any future circuits into the main panel from the attic.  Finally, the main panel must be clearly labeled to ensure that the homeowner knows which breakers belong to which circuits.  I typed mine up on the computer, laminated it, and glued it to the inside door of the panel.  With that I was ready to pass my electrical inspection.  The inspector placed a sticker on my main panel notating to the power company that I was okay to hook up, but I will be waiting a couple more months before actually calling them to hook me up.  The longer I can work without power at the main panel, the safer I will be. 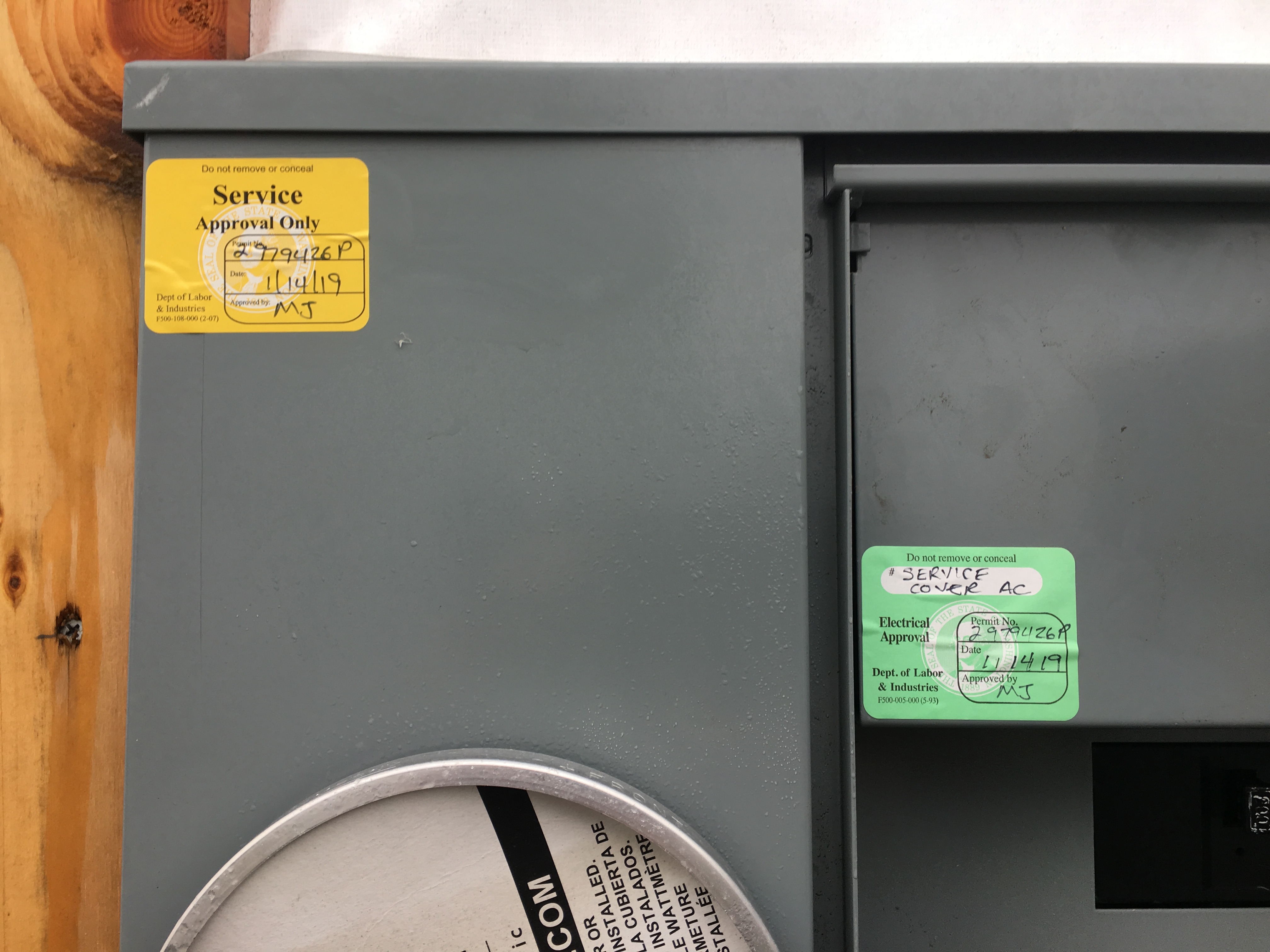