mbath Posted on September 9, 2018 Posted in Building Your Own Home, Do Your Own Electrical Work, Wiring Your Own Home No Comments Tagged with Conductor, Current, Gang Box, Joist, NEC, Romex, Stud

With all of the gang boxes nailed into place, it was now time to run the wires from the main panel to each individual outlet. Bear in mind that what we refer to in English as an electrical outlet is known as a ‘receptacle’ in the electrical code. When I refer to an outlet as an electrician, I am talking about the location where electricity will be utilized. 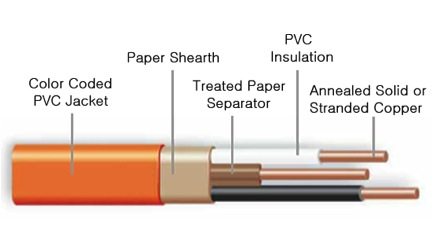 This could be a receptacle, but it also could be a light, or an appliance.  The wires will carry the electrical current from the panel to the outlets.  Modern electricians mostly use NM-B type wire, commonly known by a popular brand name, Romex.  Standard Romex contains 2 (one white and one black) or 3 (white, red, and black) insulated conductors, and a paper wrapped copper ground wire, all bundled together and wrapped in its own paper and insulation. 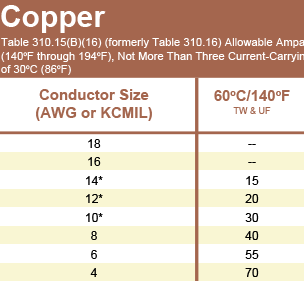 The paper might seem dangerous but it is treated and it allows the wires inside to shift and slide without as much friction, making installation much easier.  For any appliance you wish to power, you first need to decide whether to use Romex with two conductors or three.  Appliances that require 120 or 240 volts, only need two conductors to power them.  Appliances that say 120/240 require both voltages and you must run a three conductor cable to power them.  You also use three conductor wire for smoke alarms and for lights that are controlled by multiple switches.  The next thing you need to decide is what size conductors you need to use.  Without going into a significant discussion of Ohm’s Law ( V = I * R ), just know that the more current a given appliance needs, the bigger the wire needs to be to ensure the electrical voltage doesn’t drop significantly by the time it reaches the appliance, and the wire doesn’t heat up so much to melt the insulation and cause a fire.  Properly sizing conductors can be quite involved, but doesn’t need to be when dealing with residential construction under normal circumstances.  It can usually be simplified to just using the table above found in the NEC (National Electrical Code), unless the appliance is going to be running continuously. 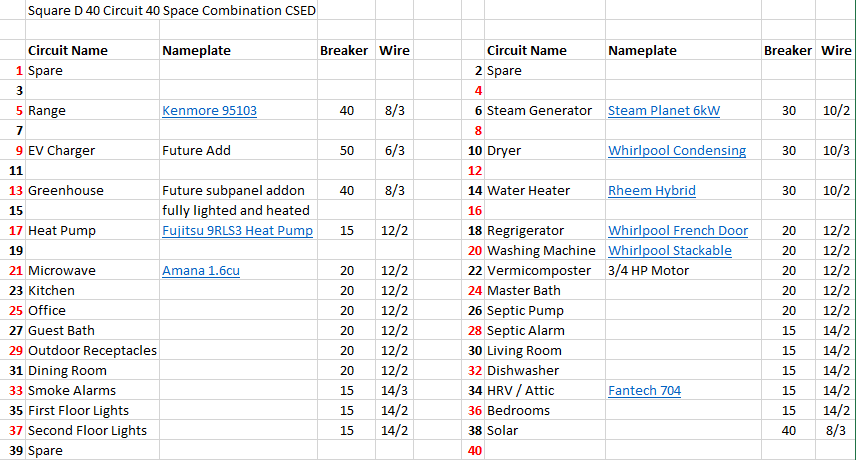 As you can see, I listed all of the wire sizes for each circuit.  This way, I was able to plan out which route each wire would take from the main panel to the outlet it is powering.  When several wires take the same route, that is referred to as a raceway.  It helps to plan out raceways in advance so you can drill one big hole that is just the right size for the wires instead of a bunch of smaller holes for each individual wire.  It is easier to start by running the larger wires first, and then run the smaller wires around them, than to do it the other way around, because when you have a hole in a floor joist or stud that many wires must fit through it is easier to stick the larger wires through first.  For example, the first wire I ran was one of the bigger ones, for my induction range.  The manufacturer states it requires a 40 amp circuit, with access to both 120 and 240 volts, so using the table above, the circuit requires 8-3 Romex.  You can see it as the large black wire in the raceway pictured below. 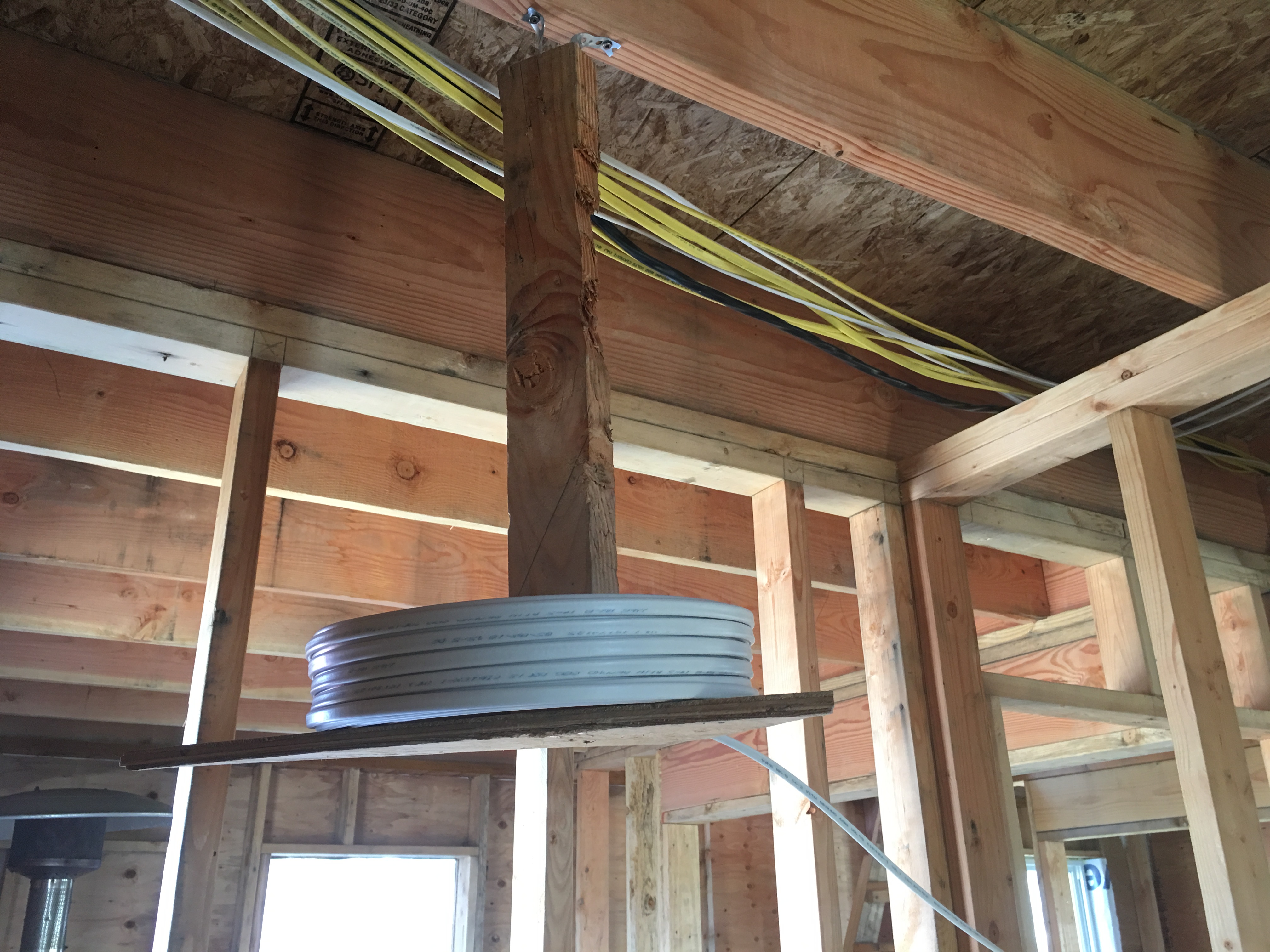 I built a makeshift wire caddie (above) from some scrap wood so that the wire unravels straight.   The circuits for appliances like the range are very simple, and usually consist of just a single wire.  Once I had wired all of the appliances, I started on the circuits for the receptacles.  Each of these circuits contains multiple receptacles, so you run a wire to the first gang box, and then another wire from the first box to the second box, and so on.  Building codes require some receptacle circuits to be on their own, like for bathrooms and garages.  Kitchens must have two separate receptacle circuits, although one can be combined with the dining room as I did.  This is to ensure that several high powered items like blenders, hair dryers, power tools, etc can be used at the same time without using up all the available current in the circuit.  Bedrooms, on the other hand, can be wired on the same circuit since those receptacles are usually only used for low power items like phone chargers, lamps, computers, etc.  Sometimes, due to the layout of the boxes, it makes sense to run power out of one receptacle to two different receptacles like you can see here. 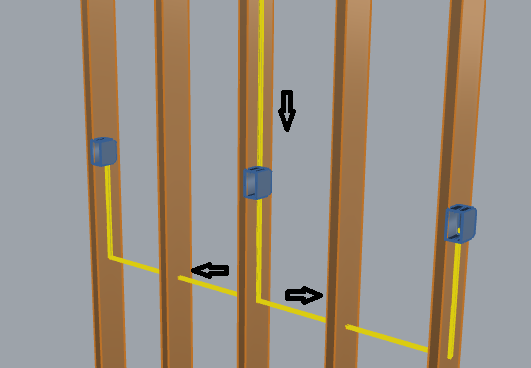 In these cases, thorough planning is required to ensure that you don’t run too many wires into the gang boxes, which only allow a certain volume of wires and devices to fill them.  Box fill calculations sound difficult at first, but are pretty easy once you get the hang of them.  Each outlet is labeled with it’s volume, and using a table in the NEC you can quickly see how many electrical current carrying conductors of a certain wire size are allowed.  The gang boxes that I used spell out exactly how many conductors can be run through them, so this part of the calculation is already done for you.  In addition, most gang boxes have a light or a switch or a receptacle in them, so that counts for an additional two conductors.  Last, you have to count an extra conductor to account for all the ground wires bundled together.  For example, in the gang box pictured below, there are three 14 guage wires that contain two conductors, one wire that contains three conductors, and two switches will be installed in the box. So you have to add up 9 for the conductors, 4 for the switches, and 1 for the ground wires, for a total of 14.  You must ensure that this box is allowed to contain at least fourteen 14 guage conductors. 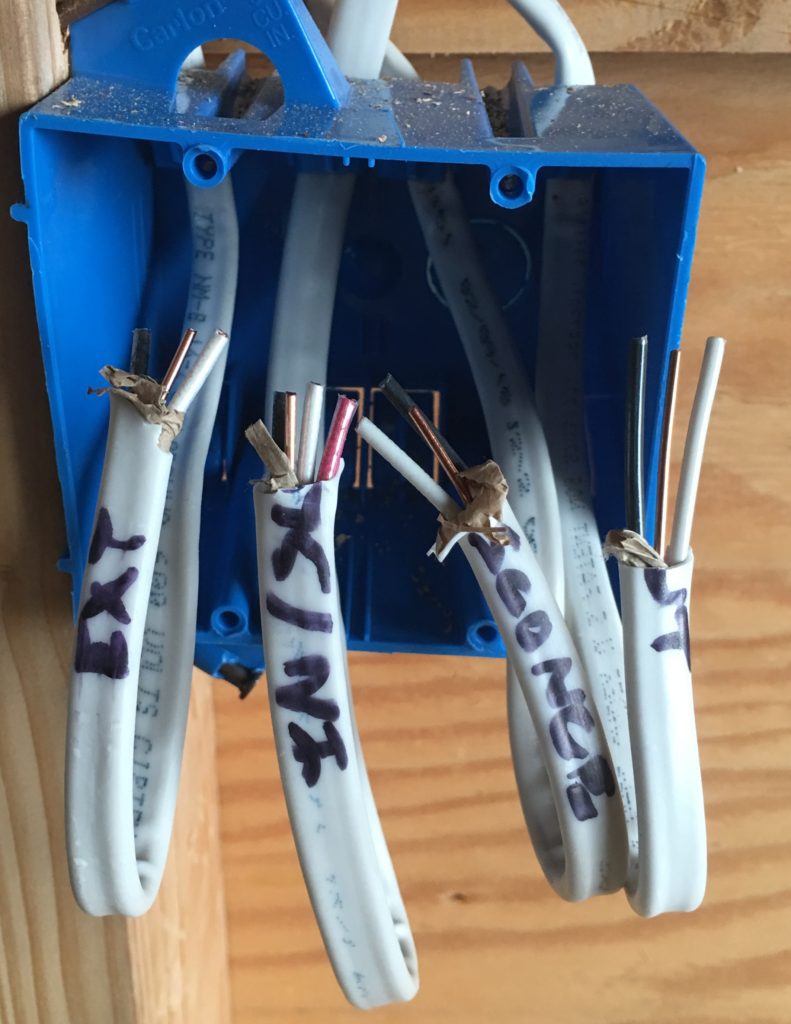 Below, if you look very closely at the printing near the center of the photo, you can see how this single gang box allows nine 14 gauge conductors, but only eight 12 gauge conductors (and seven 10 guage).  Electrical code requires 12 gauge wire to be used in bathrooms, kitchens, laundry rooms, and garages.  So imagine the scenario where we wish to run power out of one kitchen receptacle and into two others.  You would count 6 for the three two wire conductors, 2 for the switch, and 1 for the ground wires, for a total of 9.  Here we have a problem, because this box only allows eight 12 gauge conductors.  This is where the planning comes in.  In this case, you would have to either plan out the route for the wires differently, or purchase a larger single gang box that can fit the wires. 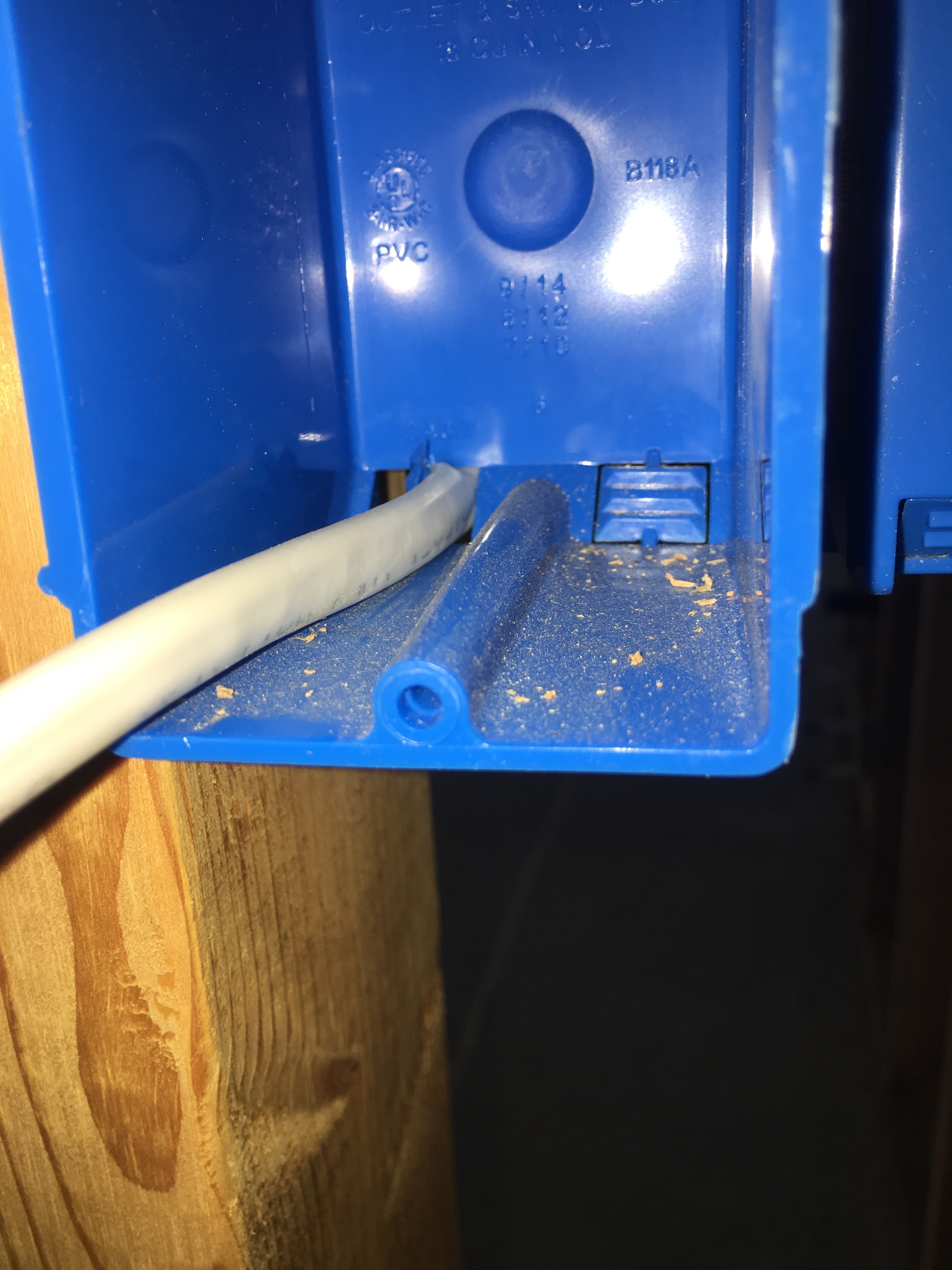