Saving Sustainably » Building Your Own Home » Step 16a – Attach the WRB

mbath Posted on June 8, 2018 Posted in Building Your Own Home, Do Your Own Carpentry, Framing a House No Comments Tagged with Gable End, Plumb, Plywood, Polyisocyanurate Foam, Sheathing, Stud, Truss, Tyvek, WRB

With the house completely wrapped in a cozy layer of polyiso foam, I was now prepared to add the water resistant barrier.  The Tyvek WRB comes in a 9 foot roll, and should be stretched taut across the surface of the wall.  Holding a 9 foot roll, stretching it tight, and at the same time attaching a 16 foot strip of 1×4 over the top all on my own was daunting to say the least, so I was very fortunate to have a friend help me out. 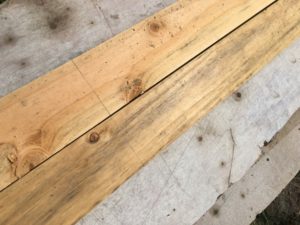 The process began by laying out the 1×4 furring strips and marking the screw locations on each board.  The furring strips must be attached by 4″ screws every 2 feet both vertically and horizontally.  The 4″ length is so the screw can go through the 3/4″ furring strip, the 1″ polyiso foam, the 1/2″ plywood sheathing, and still have another 1.75″ left to penetrate the stud.

My helper held the roll of Tyvek up on the wall while I lined up the first furring strip over the top of it, lined it up with the stud running behind, ensured it was plumb, and then she pulled it tight as I screwed the furring strip down.  We continued down the length of the walls in this fashion, unscrewing the small blocks of wood that had been temporarily holding the foam down as we went.  The rolls came in 100′ lengths, so I had to use half of one roll, and then finish up with 2/3s of another.  I lapped the seams 12″, and used Tuck tape to secure the edges of the WRB to the foam.

The second layer of WRB was a little more difficult, not only because it was way up on the second story of the house, but also because it had to be installed behind the furring strips that I had already screwed in.  Fortunately, 1×4 boards are relatively flexible, and I had left the top screw out.  Additionally, I had only installed every other furring strip so there were enough to hold the foam and WRB securely to the wall, but not so many to make the top layer easier to attach.  I built a make shift holder (bottom center of the pic above) with some scrap wood and a 3′ nail stake so I could place the roll over the stake and it would unroll at the proper height as I moved the holder down the length of the wall.  I used the other half of the first roll, and finished it off with 2/3s of a third roll.  This left me two rolls with about 35′ left on them to finish wrapping up the very top of the walls and the gable end walls.  Once again, I taped all the edges of the WRB to the foam using Tuck tape. 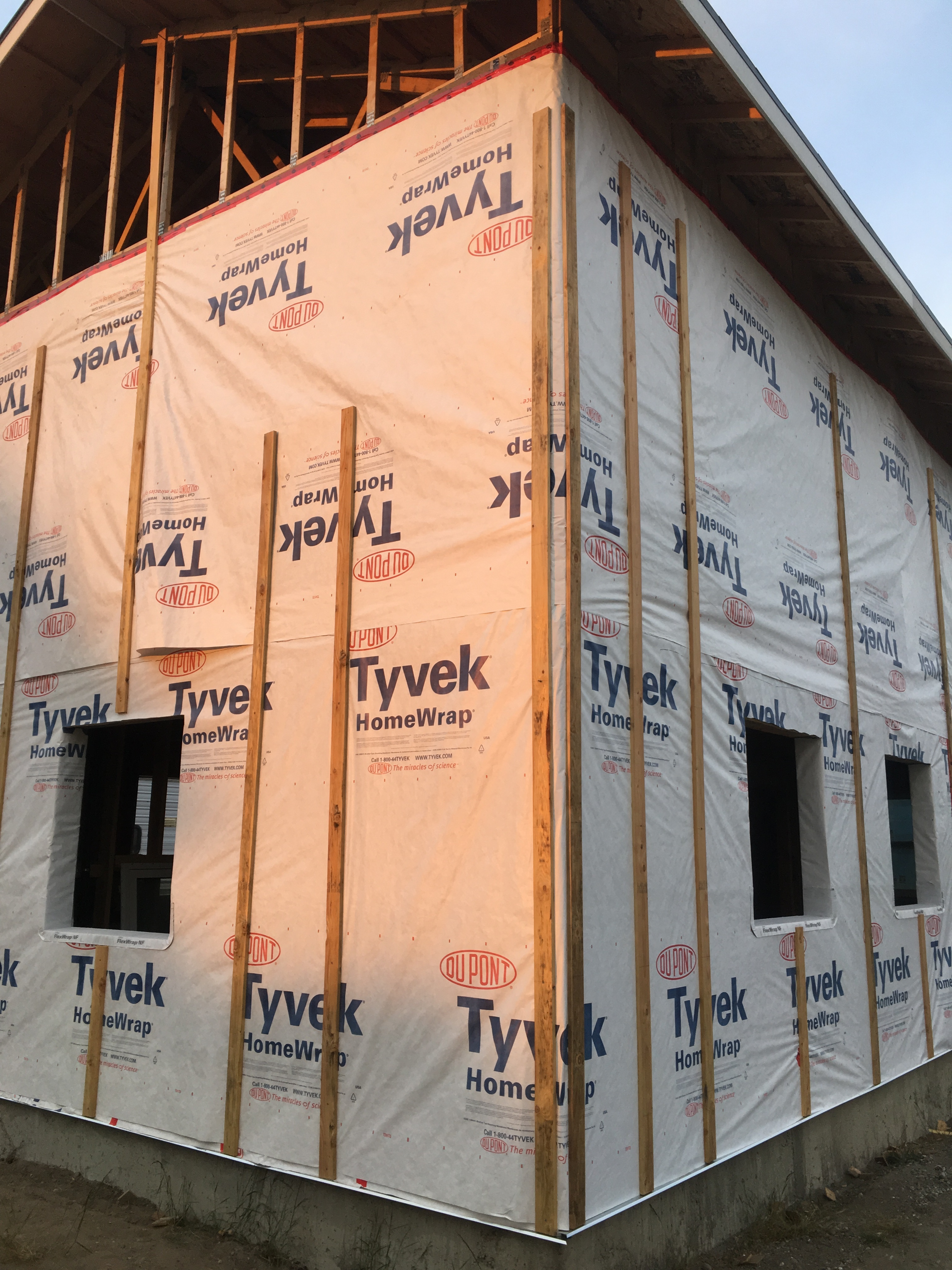 I won’t be installing the WRB on the gable ends of the house until they are sheathed.  Currently the gable ends consist of nothing more than the gable end truss, so not only does it not have adequate support for the WRB, but it is also 1 1/2″ shallower than the walls below due to the lack of 1/2″ sheathing and 1″ foam.  Due to a bit of rain in the forecast, I am going to wait until the windows are installed before taking care of the gable ends.  Also, there are still quite a few furring strips left to be installed.  These remaining furring strips will have to be notched around the windows and I want to ensure that they are cut precisely to fit, so I will also be holding off on attaching them until the windows are complete.